Whoever gave the name to this plant must have been aware of an immensely powerful, truly celestial energy hidden behind its already very amazing appearance.

Already its height is impressing. Angelica is certainly one, if not the tallest of all the Umbelliferae (Apiaceae) plants rising vigorously up to two meters from the soil and spreading its huge “seed-umbrellas” into the air while its root, as if to counterbalance the thrust for the highest, penetrates deep into the ground. 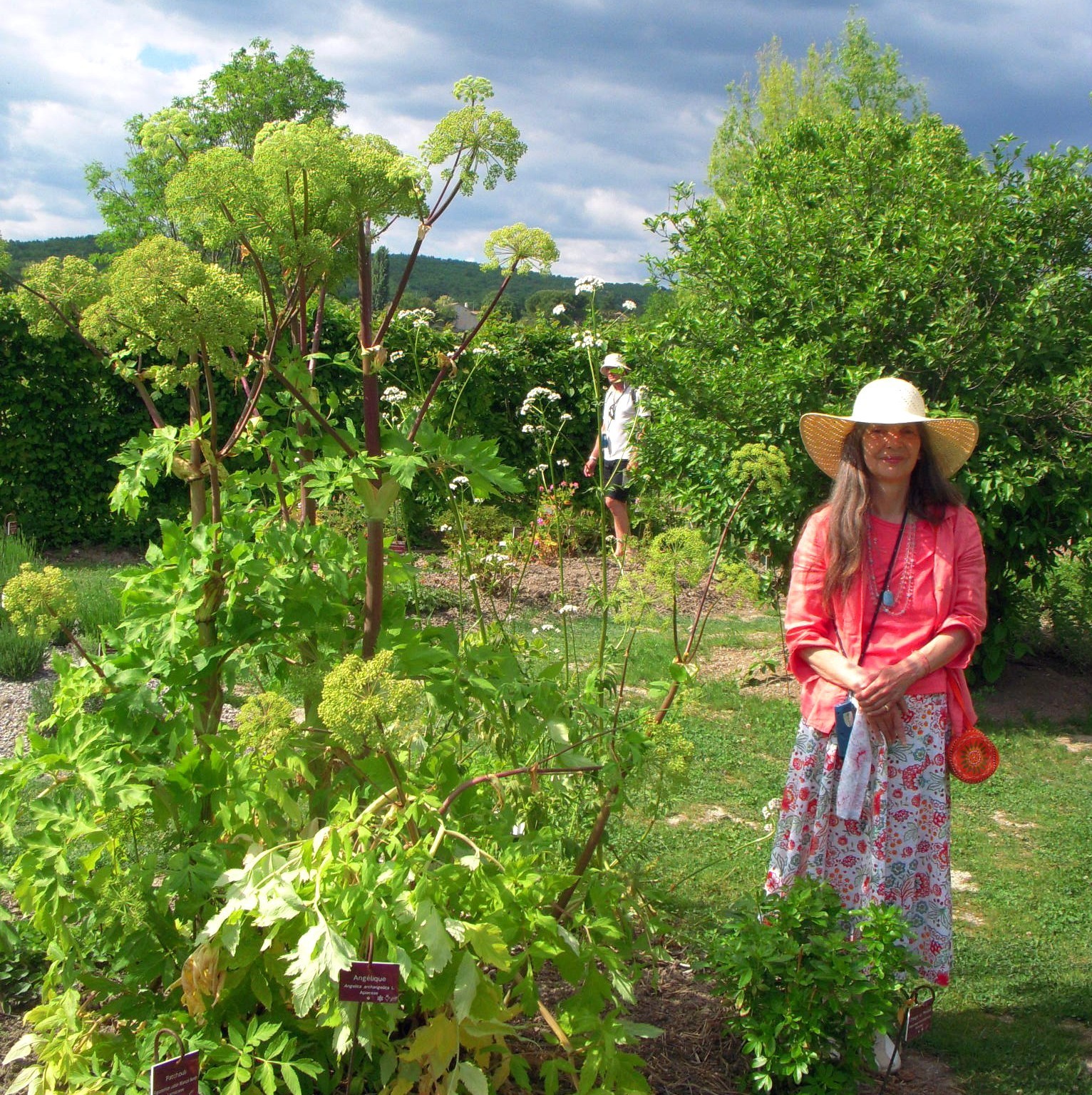 Angelica is a medicinal plant coming from Northern Europe, where it thrives and where it contains the bigger amount of bioactive compounds.

The Vikings introduced Angelica to other areas in Europe when they started to do trade with their inhabitants. The plant was a very important trade product and was even used as currency for commercial exchange.

The Latin name Angelica archangelica comes from the story of a French monk of the 17th century. This monk said that he had a dream with the Archangel Raphaël, the healing Angel, telling him the power of the plant against the plague devastating Europe’s population for the 3rd time in 3 centuries.

Angelica is one of the few medicinal plants where the theme of essential oils has literally overpowered its entire build-up; essential oils are everywhere: in the seeds, in the stem, in the leaves, in the root.

The spicy-fresh and aromatic fragrance of Angelica root oil is direct and clear. It creates its distinctive aura.??The essential oil from the angelica plant suggests something like:

“Don’t give up! Stick with it – nothing has been lost. Don’t be afraid- begin to rebuild. You are strong – nothing will knock you down!”

An ally for body and soul

Looking at Angelica, everything tells us that this plant is fully manifest and yet fully elevated and imbibed by most subtle energies. No wonder that Angelica root oil plays a major role as a remedy against fear and as an anti-depressant, acting as a strong nerve tonic and energizer for our energies. It is rare to find an essential oil, mainly composed of monoterpenes, whose influence is so all encompassing grounding and strengthening at the same time. Of course, Angelica has not the subtle floral notes of a Jasmine or a Tuberose oil, nor the fresh enticing notes of a lemon Verbena. But is has something unique and vital: as a root oil its straight-forwardness signals help from the earth and this particularly with the help of these basic fragrant building blocks, the monoterpenes, which are normally more found in the trees of the citrus and conifer groups. Monoterpenes were the first of the fragrant molecules in nature to be created in the long span of aromatic evolution which started more than 200 million years ago. They are warming, invigorating compounds which may help Conifer trees to survive the highest altitudes under extremely low temperatures.

Angelica comforts the physical and psychological structure of human beings at the same time. It soothes the nerves of the stomach (where matter is transformed into energy) and helps against indigestion and flatulence or problems linked to metabolic dysfunction like cellulitis or obesity. On the other hand, the cortico-mimetic function of its major compounds (a- and b-pinene, limonene) causes the release of cortisol from the adrenal glands helping to alleviate pain and inflammatory reactions and strengthening the area of the kidneys, our “life batteries”, as Chinese medicine sometimes calls them. The hormone-like properties of certain monoterpenic oils with their effects on the axis “pituitary-adrenal-reproductive glands” are echoed in the adrenal response of Angelica root oil.

Its warming nature helps also in cases of arthritis, gout and rheumatism.

Due to its balsamic nature Angelica root oil has also regulating effect on the secretion of mucus, making it a good ally against bronchial problems, sinusitis and coughs. It has also tangible skin protecting properties, especially when the skin is congested or irritated.

The bitter substances contained in the oil also play an important role in preventing cancer.??Angelica oil is a well known carminative. It is a very effective, bitter-tasting medicine for a weak stomach or weak digestive system as well as for dyspepsia and flatulence. It stimulates production of digestive juices and is particularly helpful for nervous gastritis, as well as a preferred treatment for stomach disorders. Not only is it healing, but it also has a very calming and balancing effect on the nervous system. This is an ideal combination since so many stomach disorders are caused by nervous tension and anxiety.

In case of sudden weakness, put one drop of undiluted angelica oil in your palm, rub both hands together briskly, then hold your hands under your face and nose. Breathe deeply! You will soon notice its strengthening effect. This is also helpful for nausea, weakness, and anxiety when traveling.

But above all Angelica is a psycho-spiritual power plant, always surprisingly new in its grounding and uplifting strength. Its psycho-active energy helps those who feel neglected or beaten down by circumstances, and envigorates those who suffer from anxiety caused by the lack of vital energy and having lost “ground under their feet”. Angelica bestows back the contact with reality and makes it livable. It works directly and immediately on our brain chemistry, releasing neurotransmitters that make us feel awake, with a zest for life and existence – and with a positive outlook for the world and our own future.

Angelica, as German aromatherapist Ruth von Braunschweig writes, has an influence on noradrenaline – “it makes you feel awake and optimistic” – and possibly even dopamine production. These “creative“ hormones cause our thoughts to abandon old trodden paths. They activate mobility, imagination, intuition, also increasing our faculty of perception, while gently lifting us out of sadness and melancholy.

Angelica conveys “angelic” confidence and courage. It is one of the great helpers during the shaky transition phase of our planet and its human “colonizers”. Access to higher planetary energies – particularly with the help of medicinal plants – will be more and more discovered by the pioneers in natural self-healing.

Angelica – an archangel with the radiance of adamant courage and strength.