The Cypress with its botanical name Cupressus sempervirens – is a perennial evergreen (lat. “sempervirens”) tall tree, cone-shaped growing to a height of 25-45 meters. The name “Cypress” appears in many plants of the Cupressaceae (Cypress family). Most of the plants belonging to this family are from the genus “Cupressus” and “Chamaecyparis”, but also the genus “Fokienia”, “Callitris” and others appear in this group.

Traditionally, Cypress was found in the eastern mid-oriental regions. Persia has a very strong tradition with the Cypress tree. In most of the Persian gardens, Cypress occupies a special place. The oldest Cypress tree is located in Persia and has an age of around 4000 years. Today Cypress is mostly seen in gardens and cemeteries of the Mediterranean area. The island of Cypress is also named after the tree where it was worshipped in ancient times.

Many essential oil plants need complicated methods to release the best quality oils. Sometimes also different types of distillation are needed for different types of bio-chemicals in the oil, like Ylang Ylang for example which yields 6 different oils… And the farmers/distillers often even keep their special secrets in order to excel with the highest quality result.

Without spreading branches too much sideways the clear-cut natural conic form of the Cypress tree points upwards in a strictly vertical directed shape. This gesture speaks for itself. There is a beautiful “signature” or hidden meaning in this straight upward growth. The lateral direction does not seem to interest the Cypress so much – as if it wants to say: “upwards is more important, I get more from there”. This has its own analogy in the erectness of our human “building shape”. In times of changes, emotional upheaval, undecidedness, loss of direction… Cypress oil challenges man to focus his attention upward to concentrate on the essentials clearly expressed also through the astringent properties of the essential oil. The fact that we find this tree preferably in the cemeteries isn’t so much a sign of grief, but rather indicates an invitation for a more clear upward-directed attitude and a focus on the fundamentals of man’s mission on Earth. The message is rather “rise up, don’t stay flat, don’t get stuck, don’t get lost in mourning”. To have one’s heart dwelling in heaven and the feet rooted on the ground is the message of this tree.

Since ancient times the Cypress was estimated for ritual purification. Witnesses of ancient Greek and Roman mythology show that the Cypress was dedicated to Hades (respectively Pluto), God of the underworld, and was identified with death as a transition for eternal life. The Greeks used the wood to shape the statues of their Gods…

In accordance with its psycho-spiritual qualities, Cypress oil has a lasting effect on the deeper subconscious side of us. It is of consolation in case of emotional burdens, loss of a loved one, separation… it reduces anxieties and balances a stressed nervous system. Thus it is only natural that it strengthens the heart and allows Qi’ or Prana energy to flow more easily.

Here an experience of a nurse in a palliative care situation:

“A nurse reported: Many patients experience the process of dying as too early. Old problems are not yet settled or not yet addressed. A dead person in most cases has a very clear, peaceful facial expression (except if death happened due to an accident or the like). Cypress oil creates this expression of peace on the face of a person often already before death happens – this is my observation.”

And here another quote on the “emotional “character of Cypress oil:

“It is also used to create an emotional cleansing, moving a stuck or slow-moving healing process forward. Its strong ability to help a person release emotions and trauma can even be described as purging and can be intense, especially if you’re not prepared for the work it’ll ask of you. In addition to the emotional flow it can create, Cypress oil can also help us to learn how to go with the flow, showing a person how to let go, trust the process of life, and enjoy the course. (Because of these qualities it might also help a person struggling with loss, control, tension, and more.)

I’ll say it again though: it’s a strong oil to use emotionally. But it’s worth it. Trapped emotions might be rough to deal with, but it’s better than ignoring them. (http://www.sustainablebabysteps.com/cypress-oil.html)

Cypress oil has a natural let-go ability on the psychological as well as on the physical level. The latter is shown in its capacity to lessen crampings and spasms caused for example through whooping cough, dry coughing, bronchitis, etc. Spasmodic coughs can be relieved by rubbing a few drops of the essential oil on the chest. Diffusing some drops also makes sense. This healing expectorant effect of the Cypress has been known throughout the cultures at all times. It also helps to relieve asthma attacks. Some drops in a bowl will act as preventive treatment during the night.

One of the preeminent physical gifts of the Cypress lies in the stimulation and regulation of the blood flow. This action partly is based on its reconditioning and tonifying effect on the veins which explains itself through its astringent properties. It may be blended with Clary Sage, Geranium, and Lemon and used as a salve or ointment to minimize varicose veins. It has to be applied in kind upward strokes – no massage!

The harmonizing effects of Cypress on all circulatory processes in the body makes it also a good helper for all kinds of menstrual problems. Cypress oil is one of the most important essential oils for dysmenorrhoea (menstrual pains) and menorrhagia (excessive menstrual bleeding). It has balancing influence on the female hormone system and during menopause it relieves hot flashes in combination with Clary Sage. As a preventive action, it is effective against ovarian cysts.

Cypress can be regarded as one of the most effective oils for the circulatory system. It is able to soften the walls of hardened arteries and reduce angina pain. Understandably, its astringent properties make it a helpful way for strengthening the connective tissue. It helps to dissolve lymphatic congestion, relieves rheumatic pains, reduces cellulite, and uplifts the energy level. It is also an excellent component of skincare products.

Being an excellent medicine for all problems with too much fluid Cypress oil is effective also in case of edema, incontinence, diarrhea, extreme perspiration, sweating of the feet (it acts as a good deodorant, too). As per the advice of the Greek physician Galen (165 A.D.) Cypress acts as a good remedy against internal bleeding and diarrhea. Also according to experiences, it is in fact a good choice in case of bleeding gums and nosebleeds.

The essential oil also has good anti-infectious, anti-bacterial, and anti-microbial effects. Most bacteria, fungi, and viruses cannot exist when confronted with special essential oils, particularly those with a high proportion of phenols, carvacol, thymol, and terpenes. Today in face of life-attacking and drug-resistant viruses, and bacteria, these immunizing faculties of many plants with their powerful biochemical essential oil compounds have again started to attract the attention of modern medicine, especially in the circles of Complementary Alternative Medicine (CAM).

mix in a bath base – breathe deeply during the bath and massage your curves for 20 minutes.
(Belle Santé magazine)

in Hazelnut carrier oil or Transcutol: 30 ml supplement
8 drops on the chest and 8 drops on the back 3 to 5 times a day as needed.
(NARD – Natural Aromatherapy Research and Development)

The astringent effect of cypress oil makes it an ideal massage agent for weak connective tissue.

As a synergy for Tinnitus problems

As a synergy for Cystitis

Cypress oil has a contracting and soothing effect on the skin. It is effective for greasy, oily skin and acne as well as eczema. Combinations with Roman Chamomile (against inflammation), Juniper berries, and Cedarwood (blood-purifying and reducing sebum production) are particularly effective. The oil is helpful in cases of 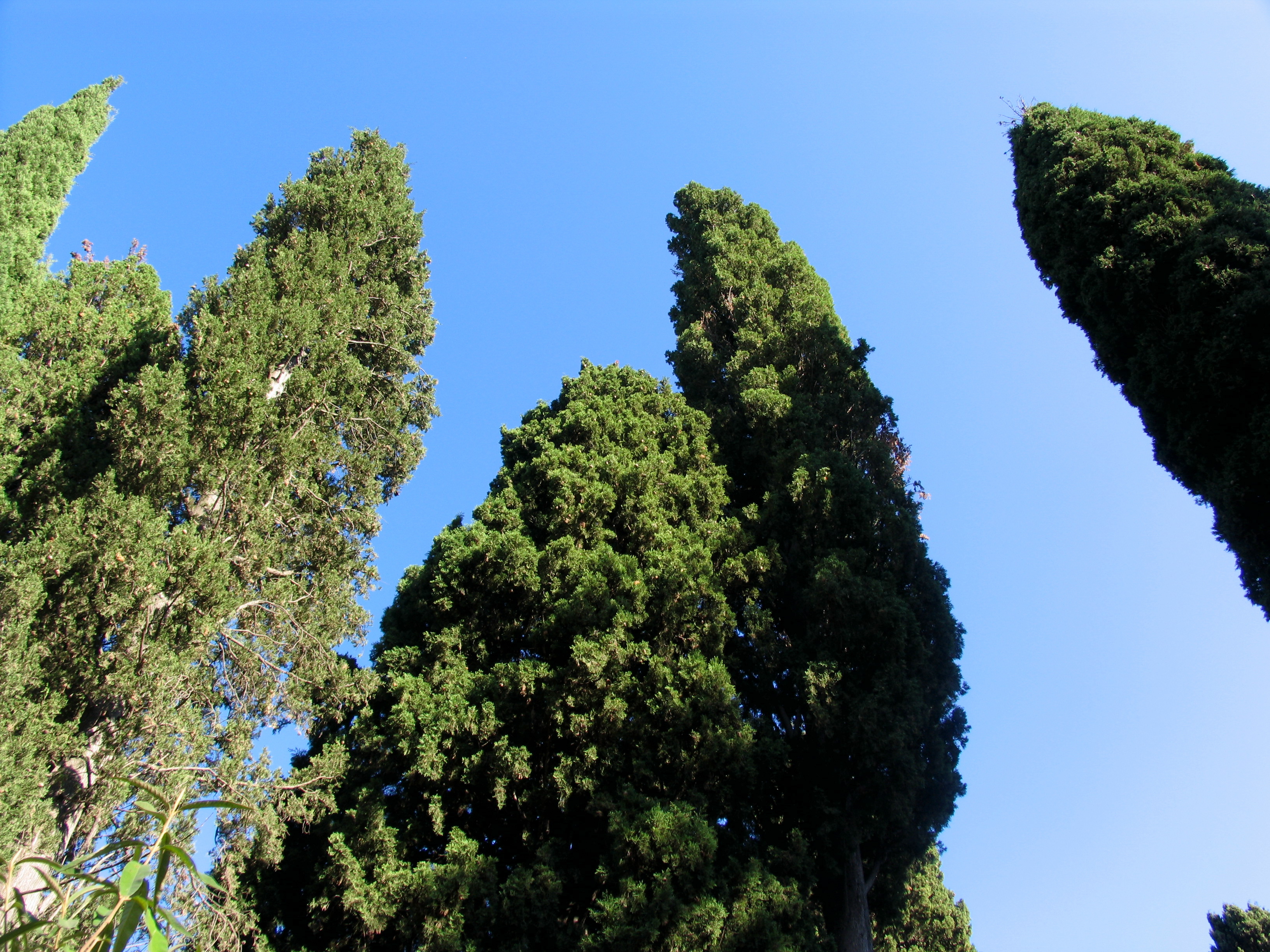 “When I returned to the United States after my time spent in Provence, I noticed a familiar, slight, uncomfortable scratchiness at the back of my throat, which, in the past, had preceded me getting strep. I proceeded to use the cypress oil following the protocol set forth by Kurt Schnaubelt in his book “Advanced Aromatherapy”. Admittedly, the initial intensity of the oil in my throat was a bit unpleasant, but the benefits of near-immediate healing after only about five applications far outweighed any brief discomfort I may have felt, and I am happy to use it again and recommend it to my family, friends, and clients!” (Tracy Seuss, CMT, USA Sept. 9/ 2014)

“A participant of the congress remembered during a workshop with special exercises spontaneously her former husband who died 20 years before in an accident. She said that she could be in contact with him now, and – as she expressed – finally release him.

The Cypress exercise was to note down one or more male partners and to thank them inwardly. She had right away the response. Tears were just flowing abundantly. She told us without hesitation and with lots of emotions about her former husband whom she had lost just 3 months after their marriage and whom she would have preferred to follow into the tomb. We were utterly touched. The Cypress was the right oil at the right moment for the right person.” (2nd Aroma-Psychiatry-Congress, Basel, Switzerland, 2012)

“Marilyn had her varicose veins lasered in the Doctor’s office about the end of January. She developed phlebitis in the area shortly after the procedure and was in a lot of pain. She equated it to be worse than childbirth. The surgeon told her basically to go home and it would eventually resolve itself. Her pain was such that she could not go to work was not sleeping, etc. I found out about it, did some research in Dana’s book, and shared it with her. She used Helichrysum, Cypress, Lavender, and Message oil. In 10 minutes she had relief and has never looked back. The pain was relieved and phlebitis resolved.” (www.TracesEtc.com; www.MyForeverGreen.org/536852)

“I have a story I am excited to pass on. Last night my son came to me for an insect bite. Wow! It looked like a big spider bite. I grabbed the Peppermint to give him some quick relief. After a few minutes not much relief….. Through the night the redness had come to his stomach so we applied for more pain relief* and gave him a liver cleanse. By the morning his whole back was consumed. I called Darlene and she told me to put Helichrysum, Cypress, and Lavender on him before he gets in the bath and then reapply after he gets out. We gave him another bath two hours later. The second bath really pulled out lots of toxins. We tested him a couple of hours later and the results found that he had been bit by a Brown Recluse Spider. Later in the afternoon I was showed pictures of a man bit by the same spider where under medical care, after 10 days, he showed no signs of recovery but only loss of his thumb to a devastating flesh-eating poison. Less than 24 hours after being bit my son is comfortably sitting watching TV. What a gift we have in these oils!! Our creator has given us an incredible body with tremendous healing capabilities.” (www.TracesEtc.com; www.MyForeverGreen.org/536852)

“For 9 years I have had a benign prostate adenoma with medical treatment (Avodart + Tamsulosin). For 4 months, thanks to essential oils, I no longer get up at night. I take a compound of 2 drops of each essential oil: niaouli, cryptone eucalyptus, green cypress, mastik, sandalwood + 10 g of Tamanu oil. I massage my lower abdomen and lower back morning and evening with 20 g of essential oil for 20g of carrier oil for 3 weeks with a 10-day break. (Laurent, 62 years old)