The spirit of the sacred and of meditation surrounds frankincense since ages.

Resins and their oils (Frankincense, Myrhh, Benzoin, etc.) have always been easily associated with fumigation and purification. The special mind set-up they create is “vertical” like the smoke that rises to heaven. Vertical means also away from the boundaries of worldly “airs and affairs” and their accompanying strife and strain – back into the depth of the soul.

Frankincense has that power to uplift human awareness to that “other” level by freeing the nerves from excessive tension, allowing us to focus on the underlying transcendental unity of our inner Self. 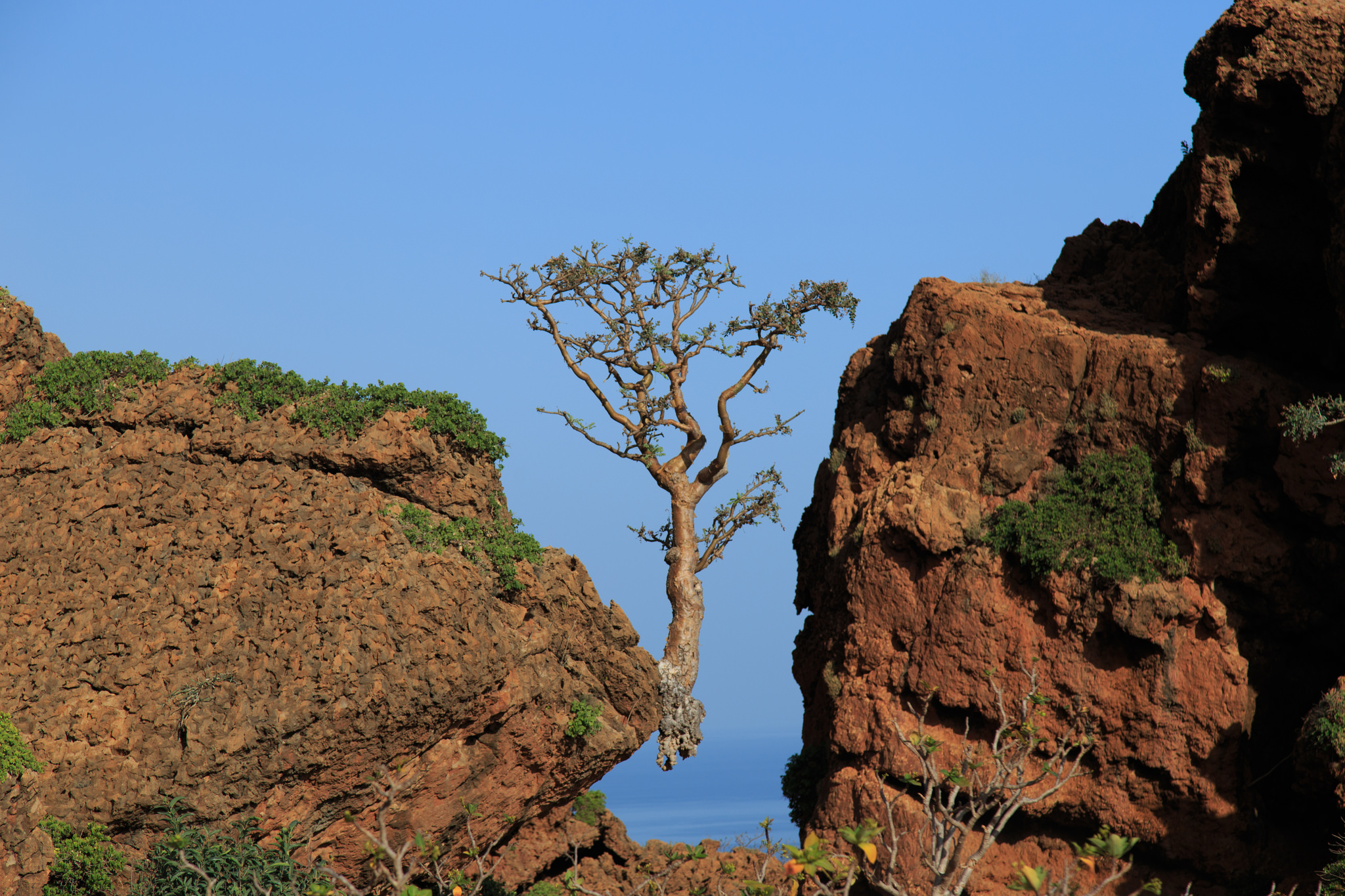 In ancient Egypt Frankincense, also known as “Olibanum”, was named “the substance being conducive to a divine state”. It was found in the tomb of the Egyptian King Tutankhamun, who died about 3330 years ago. It was used at that time as a way to help the soul to find its way back to higher realms. In the New Testament the three Magi from the East coming to see the newborn child carried Frankincense among their gifts.

The aromatic resin of Frankincense is tapped from trees of the genus Boswellia, especially Boswellia sacra and Boswellia carterii (Burseraceae). To obtain the so called “tears” of the resin (due to their teardrop shape) the bark of the tree is scraped resulting in the yellowish to white resin to bleed out and harden.

The resin can be harvested from trees that are at least 8 to 10 years old. Two to three times a year tapping can be done with the last one giving off the best quality. One tree can yield between 10 to 20 kilo of resin per year. However, after three years it needs a resting phase of some years.

Frankincense has been used since long against chronic inflammations and particularly against rheumatic diseases. Patients suffering from Polyarthritis reached relief of their pains of 60 to 70% and the swelling and stiffness of the joints decreased. This can be explained by the fact that pains are released and run by infectious mediators, the so called Prostaglandines. Allopathic medicine fights the Prostaglandine synthesis, and thus the pains created by them, through anti-rheumatics or Cortison whereas Frankincense has the same ability but without producing undesirable side effects. Clinical research at universities and in hospitals have proven these positive reactions and there is hope that in the near future Frankincense can replace, at least partly, those modern allopathic medicines.

The beautiful healing resin of Frankincense can be used for all kinds of inflammations especially for joint problems, but also any other kind of inflammation i.e. of the urinary tract, colon, and so on.

The essential oil has an intense effect on the respiratory system, beneficial in case of catarrh, asthma, bronchitis coughing, and flu or even bronchial asthma attacks because it aids to slow down the respiratory frequency and allows the respiratory volume to increase.

Frankincense deepens and revitalizes the breath. This is a phenomenon which happens naturally through meditation also and which shows the link which Frankincense has with the natural approach to self-awareness.

The essential oil when used for inhalation is capable of dissolving mucous substances in case of cough and cold. But it’s also a very good oil to prevent from winter disease. Just two or three drops of Frankincense rubbed on the neck or in diffusion in a room will create a barrier against viruses.

The cosmetic industry today offers products containing Frankincense due to its good results in rejuvenating the facial skin, preventing wrinkles and reducing scars. It is also very effective in case of acne and many other skin disorders from small one to skin cancers.

As already known through the religious and ritual use Frankincense balances the “emotional consciousness” in man. It has definitely a soothing effect without causing tiredness, but supporting clarity of thought. Frankincense is also able to influence depressions in a positive way and has a calming effect on the nervous system consequently reducing anxieties and nervous tension. 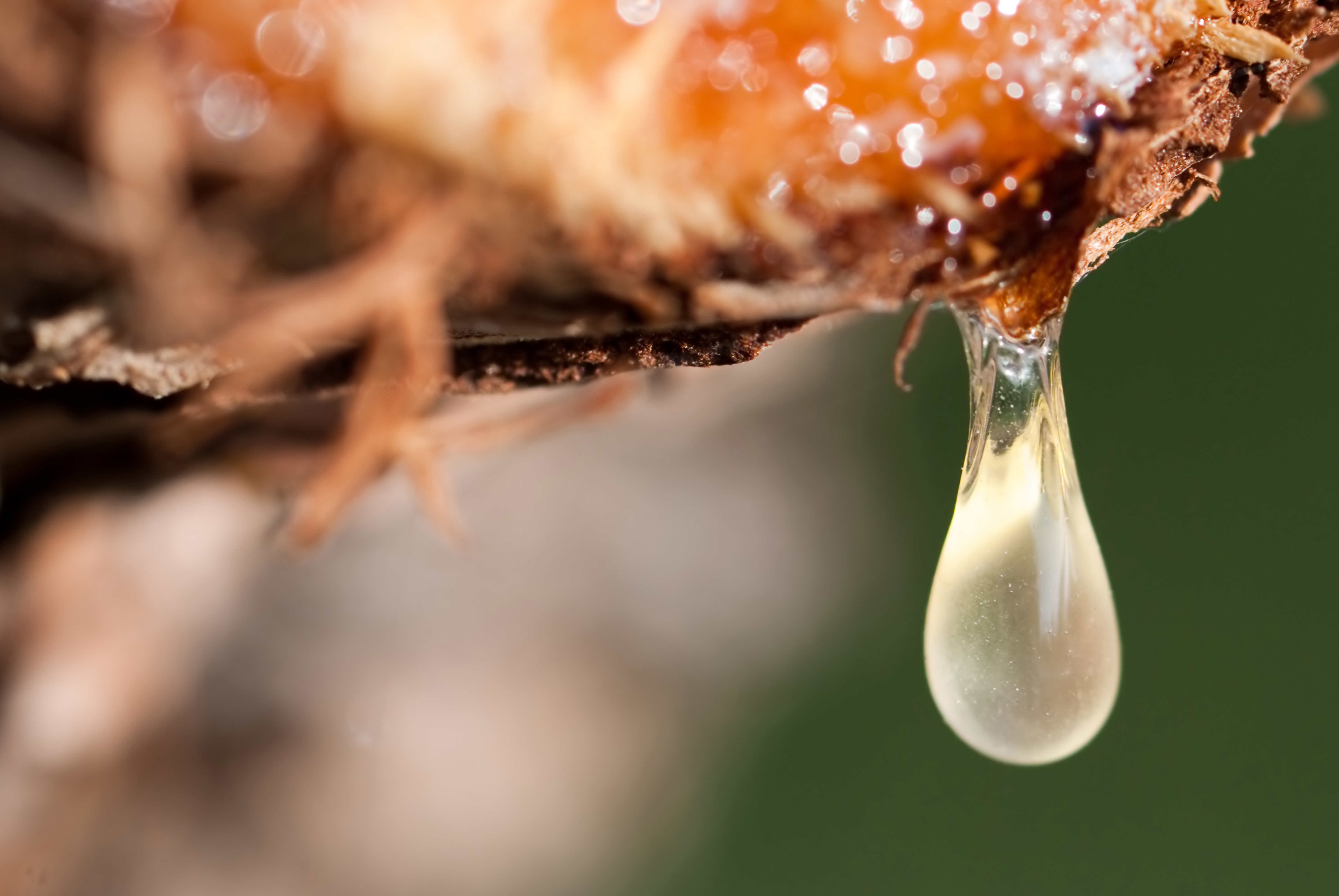 One of the most remarkable features of Frankincense is its effect on cancer. It is now scientifically proven that the use of Frankincense extract has clear results on tumors and cancer because of the presence of the so called “boswellic acid”. However, even though the pure resin shows high concentration of this acid the distilled essential oil shows very low presence of it. It may be too early to conclude on the overall anti-cancerous effects of Frankincense with its different extracts such as the essential oil, the hydrolate, the alcoholic or CO2 extract etc. since only a few scientific research studies have been made – so far only in vitro – on cancer cells. Nevertheless numerous personal testimonials show that Frankincense in all its different expressions DOES have a remarkable anti-tumor effect. In terms of serious natural approaches for cancer treatment Frankincense should definitely be considered as an important ally. We may also want to associate it with its hydrolate which seems to have more boswellic acid since the aromatic acids in general during distillation are absorbed by the water and are very little present in the essential oils.

To make it clear again : the typical Western “isolative approach” which is to always just look at the “active ingredient” (i..e. “boswellic acid” here) does not do justice to the holistic and synergistic effects of all compounds together in a medicinal plant extract such as Frankincense. We have to consider all the many dozens of biochemical compounds together in Frankincense oil – and not only these. Even if we would examine each of these compounds separately and find out certain effects of them in a one-pointed analytic study, we would not be able to conclude on the holistic properties of them all together.

Moreover, if we want to remain on the bio-chemical level, there is an enormous amount for example of so called “monoterpenes” also in Frankincense oil. Could it be that these, which have been subject to numerous studies on cancer, may also have their word to say?

We can also say that there are anyway “vibrational traces” (wow, that is bold!) of all kinds of substances (included from the boswellic acid) which act as “hidden benefactors” in the whole bio-chemical composition of the oil. This means that the actual “sacred” nature of Frankincense, as reported since ages, is a phenomenon “beyond” modern scientific approach, beyond the superficial matter level.

A true para-medical understanding of Frankincense would take into account the value of “para” (which in sanskrit means “beyond”) and go beyond the mere bio-chemical analysis. This would lead us to a more holistic understanding of Frankincense, namely that it actually can help us to reconnect with our inner flow of life (Prana or Ch’i). And thus, by bringing us back to our lost inner harmony it can help the body with its trillions of cells to find a new equilibrium – which certainly is one of the key factors for healing cancer….. 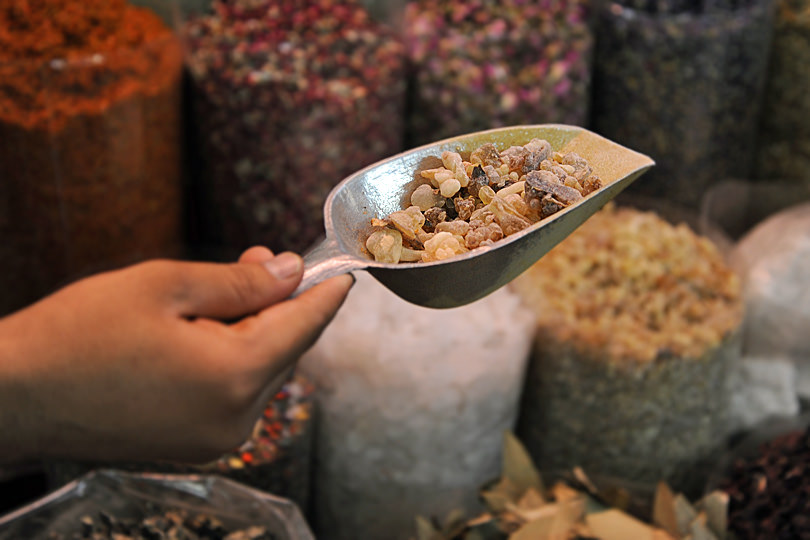 Frankincense is a real sacred ally who can help us on so many aspects. On the spiritual side the rather spiritual association of the oil with protecting man from materialistic temptations, uplifting consciousness and dissolving subconscious stress makes sense and lets us understand why Frankincense was, and still is so much used for ritual purposes.

The translucence and transparency of the so called “tears” of the resin can be considered a signature element which leads us to the already mentioned view of the ancients looking at Frankincense as “the substance being conducive to a divine state” and able to dissolve so many blocks – physical and psychological so that the true spiritual self of man, the soul or Atma, is freed to shine through.

Frankincense: a fragrant light to illuminate the night of the soul.

Some testimonials showing its incredible properties

“That evening, I trusted my intuition and chose Jasmine, Frankincense and Palo Santo. I mixed 4 drops of each one with 2 tablespoons of raw apple cider vinegar and 2 tablespoons of lime juice, both of which are natural cleansers. I immersed myself in the bath, took deep breaths and let the oils work on me, inside out. The combined scent of the three oils was divine and I could feel their healing powers gently embracing me. I slept beautifully  that night and the next morning, my chest was clear and the cough was gone – for good!” – thearomablog.com

“Emily’s son was kicked in the face by a horse. He had severe damage to his face and jaws. His jaws were wired together. After rubbing Palo Santo on his jaws 3 to 6 times a day combined with Frankincense the wires were removed in three weeks instead of three months as the doctors predicted – with no infection under his plate.” – thejoyofessentialoils.com

“My friend treated at Mayo Clinic in Rochester, MN and her oncologist had no problem with her using Frankincense EO topically while she was having intravenous chemo. During her first round without the Frankincense the tumors continued to multiply all over her body plus she was very sick and could hardly function. During her second round she used the Frankincense EO topically on her feet and topically in all the areas she knew there were tumors. She felt great and had little side effects. After 5 weeks all the tumors from the neck down were gone and the ones on her brain shrunk 30%. I know what I would be doing and it does not include chemo.” – roberttisserand.com

I also had a severe back injury where I had several herniated lumbar discs and was couch-ridden for three months.  The pain was beyond excruciating, but by encapsulating Oregano, Copaiba and Cabreuva essential oils (with carrier oil) it totally knocked out the intolerable pain. I have been using essential oils for 14 years…..Once you start using essential oils you never want to stop. They are amazing for any ailment.”  – likemindedmamas.com

“I have been using Frankincense oil for over a month now….  My daughter is an infant and is having unexplained seizures.  I ordered it after being up all night and read about it and decided to at least give it a try.  Her meds make her a bit sleepy and grumpy, but that first day I put it on her she was immediately alert and back to her normal self.  I rub a drop on her feet and brain stem area twice a day.  Since then she has only had one seizure and it was very mild compared to her other ones which normally lasted 20 plus minutes.” – epilepsyfoundation.ning.com

“Our son had his first partial complex seizure when he was 18 months.  By the time he was 3 1/2, he was on three different anti-seizure medications yet he was still having daily seizures.  The seizures were awful, but the medications’ side effects were equally as bad, and they weren’t stopping the seizures.  We were desperate to find a solution, so when a friend of mine asked me if we had tried Frankincense, as kooky as it sounded, we decided to give it a try.  That was over 8 months ago.  We applied a couple of drops of Frankincense to the front and back of his neck twice a day.  Result: from day 1, no seizures.  Over the next 7 months, we weaned him off all three of his anti-seizure medications.  He is now medication free, oil only, for a month without a seizure.  Frankincense oil has given our son his life back.” – epilepsyfoundation.ning.com