The tender white blossoms of bitter orange trees yield a very precious essential oil of a fresh-sweet, angelic fragrance that has charmed man over centuries. The story is told that Anne-Marie, Countess of Nerola, adored the fragrance and had all her clothes sprayed with Neroli, scented her bathwater with it and even perfumed her gloves and letter paper. It is through her that the oil came into fashion amongst the 17th century Italian high society and very soon found many enthusiasts. Neroli oil is subtle and strong, uniting the most enticing perfume with powerful healing effects. It stimulates the pancreas and the liver and helps in case of slow digestion and hypertension. As a natural skin toner and detoxifier it contributes to prevent premature aging of the skin. Furthermore, it has balancing effects on oily skin conditions and on acne. Due to its strong anti-inflammatory and analgesic activities it is highly estimated in the cosmetic and alternative health industry.1 But Neroli is foremost a miraculous neuro-tonic and a powerful helper against depression caused by fatigue or unreleased tensions and frustrations. It is one of the major rescue oils in case of despair and unconscious, repressed emotions. Memories from heaven – fragrant purity of the soul.

Stimulant of the Soul – Healing Properties of Neroli

Perhaps the Princess of Nerola had intuitively felt these highly effective psychological qualities of the essential oil: In aromatherapy it is deeply appreciated as a profound tranquilizer that helps to regain strength and stabilizes emotions even in severe moments of psychological shocks. It is beneficial to ease fears and reduces heart rhythm disorders caused by spontaneous or long-term stress. Therapists report the oils’ effective qualities in overcoming traumata that prevented their clients from participating actively in daily live. They experienced this effect with children as well as with adults. And even clients who at first didn’t believe in this type of therapy have started to feel a strong impact on their mood. Here is a report from a client in New Mexico:

“I have been suffering from anxiety and stress a lot and have been trying to relieve my stressors by going to counseling, exercising and many other methods. Most did help, but I noticed that I had suffered from stress and anxiety mainly when I was at work… I found my anxiety, on some days, was simply out of control! .. Then I found great information on different types of aromas. I was at first very hesitant to try this type of therapy … but soon after I noticed a significant change in my mood – simply by carrying this little bottle of Orange Blossom with me and have a deep gasp from time to time. I believe in this product. Thank you.” Richelle, New Mexico

For generations Neroli oil is estimated for calming intestinal spasms, relieving carminative complaints and reducing PMS problems. Scientific studies have now proven the antispasmodic properties of the oil as published 2014 by the National Center for Biotechnology Information (NCBI), USA and the U.S. National Library of Medicine. A group of Korean Scientists payed special attention to the question whether the inhalation of Neroli oil has effects on menopausal symptoms. Sixty-three healthy menopausal women were randomized to inhale Neroli oil or Almond oil (control group) for 5 minutes twice daily for 5 days. Before and after inhalation menopause-related symptoms, such as cortisol and estrogen level within the blood, blood pressure, pulse and the sexual desire visual analog scale, were measured. The randomized trial showed very clear results – find an excerpt here: 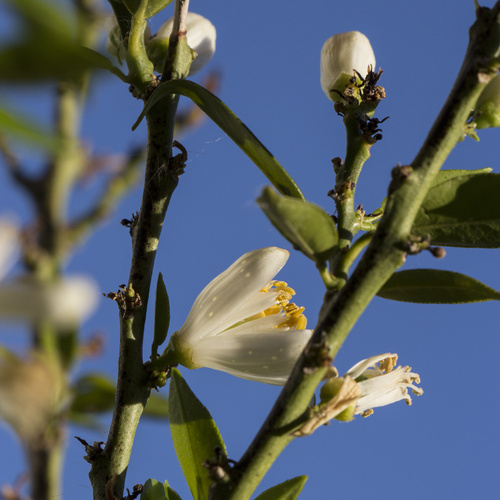 In the same year another study focusing on the anticonvulsant activity of Neroli oil was published. A group of Iranian scientists could show that the oil possesses anticonvulsant constituents which prove the traditional and ethnomedicinal application of the oil in their home country3.

Also if troubled by nightmares and insomnia Neroli oil proves its soothing effect. Here it unfolds its deeply sedative and relaxing qualities: several drops on a handkerchief put next to the pillow can be helpful. See another user’s testimonial:

“The oil that has best helped me with sleep was Neroli. As I’ve gotten older, I’ve had to go off all caffeine as it was just sticking too long in my system, making sleep difficult. In doing this and in using the above, whenever needed, my sleep is deep. However, when I need some energy, I have found that Ylang Ylang has been absolutely wonderful for this.” Ruth Dollar – Long Beach, CA

With its significant amount of monoterpenes the oil stabilizes emotions and stimulates the soul to regain strength and serenity. Many aromatherapists truly adore this aspect of the Neroli oil: It magically helps the soul to reconnect with one’s Higher Self. This effect boosts our self confidence and promotes the ability of taking initiative. We feel empowered to change our situation to the best and act out our needs and wishes. The stimulation of the interaction between the psychological, emotional and spiritual aspect of human existence remind us of the great principle of Unity Mother Nature always works with. See the following user’s testimonial in this regard:

“Because of my recent big move – away from all that was familiar and comfortable – these last few months have brought up some emotional challenges. I was looking for an oil to use in the bath that would soothe the turmoil and lift my spirits. I pulled out the Neroli, took a whiff and felt like I’d arrived in heaven. (But instead of some sort of bearded saint guarding the pearly gates I was embraced in the open arms of a troupe of sisterly goddess types!) Something about Neroli just felt right. Since then I have reached for that little bottle more often than not when I run the bath!”4

It is the complexity of the oil and its components that reflects this principle of unity and its benefits perfectly. This is why special attention on quality should be payed when buying Neroli oil. Oftentimes adulterated products are offered on the market to increase the profit of this costly oil. If chemically reproduced the variety of components and their interaction is of course not anymore given. The value of this interaction can be seen in the research made by Pierre Franchomme and Daniel Pénoel5. Through electron microscopy the french scientists and authors could effectively show that Sweet Geranium, Neroli, Niaouli within very short time can kill Staphylococcus aureus, Escherichia Coli, Herpes I Virus and Candida albicans.

Let’s have a look at some practical information on how high quality Neroli oil is obtained.

The bitter orange tree with its Latin name Citrus aurantium is a member of the Rutaceae plant family and grows to a height of 6-9 m and has evergreen foliage. Being native to China, it nowadays is cultivated especially in Sicily, Morocco, Tunisia and Egypt. It needs to be differentiated from the popular sweet orange tree. The sweet orange trees as well deliver a wonderfully uplifting and aromatic oil which derives from the fruits. The bitter orange tree in comparison yields three types of essential oil: The Bitter Orange Oil is obtained from the fruits’ skin. It is very popular in the perfumery industry and is the basic compound in famous Eau de Cologne. The second oil deriving from the bitter orange tree is Petitgrain Bigarade which is produced from the leaves, twigs and unripe fruits of the tree. Neroli Oil itself is obtained by steam distillation of the flowers, sometimes through adding a solvent to protect their delicacy. They are small, white and waxy and are usually handpicked in late April or early May. As it takes 1 ton of flowers of the trifoliate bitter orange tree to obtain 1 kg of the aromatic essence, the oil is considered to be truly luxurious. Neroli oil as well is highly appreciated in the perfumery and cosmetic industry for its soothing effects on sensible and irritated skin. It can be found as an ingredient in skin care and lotions as it shows toning qualities, smoothes wrinkles and supports elasticity. Furthermore, it prevents stretch marks from appearing and treats scar tissue as a cicatrisant agent. It is as well very supportive and considered a safe remedy in case of rosacea. The scent of true Neroli oil can be described as sweet, floral but spicy and refreshing at the same time. It mixes well with Cedarwood, Jasmine, Lavender, Lemon, Pelargonium, Rose and Sandalwood. Among the main chemical compounds we find ?-pinene, camphene, ?-pinene, ?-terpinene, nerol, neryl acetate, farnesol, geraniol, nerolidol, limalyl acetate, methyl anthranilate and indole. 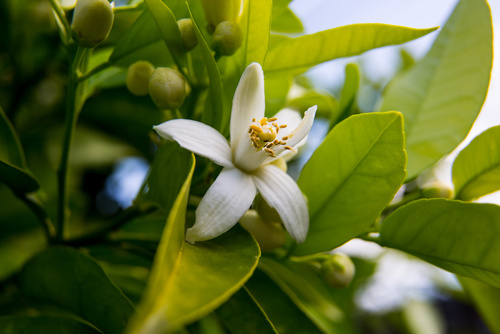 After applying Neroli oil on sensible skin attention needs to be payed when exposing to the sun.