The scent of Vanilla takes us on a journey to the various tropical islands of the Indian Ocean.

Specifically Madagascar and La Reunion today are home of Vanilla Planifolia, what is being considered “True Vanilla”. It is from there that the Queen of all Spices conquers the world with enormous success.

Who hasn’t come across its sweet scent? The pretty orchid flower really made it to the hearts of people worldwide. But what makes the relationship between the humans and Vanilla so special? What exactly is the secret of this friendship?

Studying the rich leaves of Vanilla Planifolia provides an idea of the joy and fullness with which the plant grows from the soil. It resembles the richness by which Mother Earth creates sensual joy and earthy life force. With enormous energy and power the plant grows into the visible world – one may think it is this plant that helps us to truly identify with a new level of material, sensual existence.

The oil of Vanilla Planifolia with its dark and earthy scent helps us to calm down and relax. Science confirms this effect: Vanilla scent triggers serotonin which acts as a neuro transmitter that enhances our enjoyment and fills our day with happy little moments. Besides having a biochemical effect on many activities in the brain, these hormones also act in the digestive system by affecting the enteric nerve system which is also referred to as the “abdominal brain”. This in turn influences on our thoughts, our feelings and our memories.

The scent of Vanilla from an Ayurvedic perspective

Oil of the vanilla orchid is recommended for the treatment of burnout patients as it replenishes energy and drive. It provides sweet peace and satiety, relaxation and pleasure. Simultaneously, the specific sharpness of the oil gives us a motivational push, the scent of the vanilla oil is not only sweet and ’round’, it also provides direction and strength. Comparable to a caring mother who provides a solid “feel good home base”, but the moment she sees her child is taking life too easy gives the necessary push into outside world interaction. 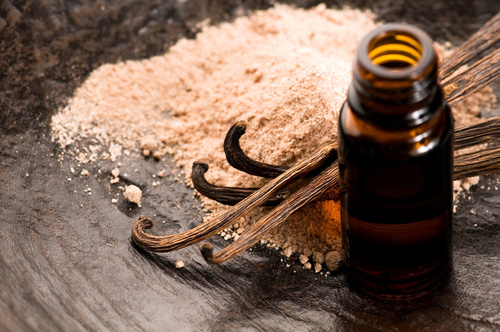 From an Ayurvedic perspective it is this ability to guide that enables the scent of Vanilla oil to balance out the fire element within us. Proverbially fighting fire with fire, the heat of the oil helps to balance strong emotions and fiery upheavals. Furthermore, Vanilla oil supports a healthy skin. It helps with blood circulation and supports the renewal of skin cells. Vanilla has anti-inflammatory qualities and heals infected spots and bleackheads. Besides its anti-bacterial properties Vanilla also is known for its anti-fungal activity. Ayurveda medicine applies Vanilla oil in the therapy of foot, toenail and skin fungus. There have even been reports that Vanilla serves as an anti-oxidant and hence can help to fight cancer.

The game of Vanilla Planifolia

Its rich taste and sensual nature are Vanilla’s most prominent characteristics. This is why gourmets worldwide rave about it, especially in combination with chocolate and, consider the combination the sweetest seduction as long as anyone can remember. To be more precise; it was on November 14, 1519 when Europeans invaded the venerable empire of the Aztecs with was Hernán Cortés first tasting the auspicious beverage referred to as “Náhuatl”. It was made of roasted chocolate beans and spices like Vanilla, pepper, cinnamon and chillies. In general it is a spicy drink, served fresh and with only little or no added honey for sweetness. The beverage was either meant to stimulate warriors, served as an aphrodisiac or it was an element in certain rituals. Either way, 3 years later, the cities of the Aztec world were largely destroyed and their empire was about to disappear.

It looks though as if Vanilla Planifolia was playing a game with us. The game of seduction. This association is not as far-fetched as it sounds for its pheromone-like qualities. Pheromones are substances that are used for the art of attraction. They signal an important information, i.e. the preparedness for reproduction. For male bugs the scent of pheromones in the air signals that there are female partners in the area ready to reproduce.

Once a year the Vanilla reproductive cycle reaches its climax when its blossoms open up on a single morning to openly display all its beauty. Local farmers need to capture this one moment and help pollinate the plants with tooth picks as tools. Why tooth picks? It was the elegant hummingbird pollinating the orchid blossoms when Vanilla Planifolia in earlier times called Latin America its home. But when the French moved their plantations to Madagascar and La Reunion (formerly called Ile Bourbon), the hummingbirds did not tag along for the ride. Since then, pollination had to be organized by hand. It is a critical step: if not pollinated, the plant will not develop a capsule. 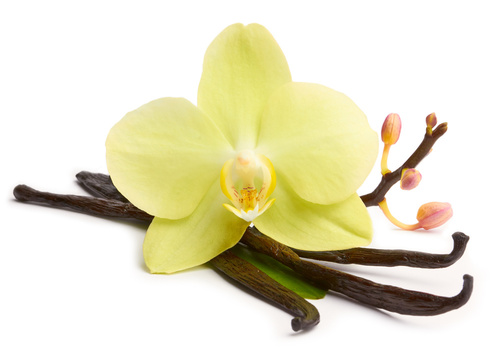 It is that handmade craft that explains the high pricing of True Vanilla. Another costly element is the multi-step fermentation process the capsules need to go through. They are being harvested when they are still yellow tinted green. Typical Vanilla aroma develops only after a process called ‘black roasting’. As part of this process the capsules are being treated with hot water or hot steam. They are then fermented in air tight reactors which make the capsules ‘sweat’ overnight. The day after they are being put out in the sun for drying. The process is repeated several times until the capsules turn black and develop the taste and scent Vanilla is known for. Capsules with exceptionally high quality produce crystalline needles on their surface that will be visible to the naked eye. These are made up of pure glucose. At this point, the Vanilla capsules take on their familiar look like we know from the store.

For extracting the essential oil from Vanilla capsules they are being treated with alcohol extraction. It takes about 3 kilogram of capsules to make 1 liter of the oil.

Obviously, the game between us and Vanilla Planifolia is on. What efforts are we prepared to undertake to enjoy the fragrance and taste of True Vanilla! And surprisingly it is not just us longing for the Vanilla orchid. Whoever has seen her growing and blossoming might get the slight impression that Vanilla herself is eager to flatter mankind and present her beauty and scent to us!

It takes two to tango – there is an undeniable relationship between this plant and mankind. Vanilla gives us grounding, peace and a sweet pleasure. In return, we cannot help but to recognize and appreciate the qualities and value of Vanilla Planifolia.