Like the Rose is regarded as the queen within the flower kingdom the Cedar can be called the king among the conifers. With its roots well fastened into the earth and its crown high stretching to the sky, the tree represents the majestic power of Mother Nature. Cedars can grow up to 50 m high, sometimes even – exceptionally – up to 65 m. The circumference of the stem of an old tree may need several persons to embrace it fully with their arms joined together…

And where does all this come from? From the air, from water, from the minerals of the soil… and? 🙂 🙂 Anorganics transformed into organics, subtle life processes programmed in a tiny seed to create this symphony of vibrational intelligence “out of nowhere” orchestrated into a huge mass of roots, wood, branches, needles, cones…

Cedar loves the mountains growing at a height of 1000 to 2 500 meters. It can become easily 30 m high and more – and it can reach an age of 1000 to 2000 years – sometimes even more. Extreme exploitation of the species of Lebanon Cedar over centuries left only a small amount of about 400 of those wonderful giant trees in Lebanon, with some of them being many centuries old and now – fortunately – protected by the government. 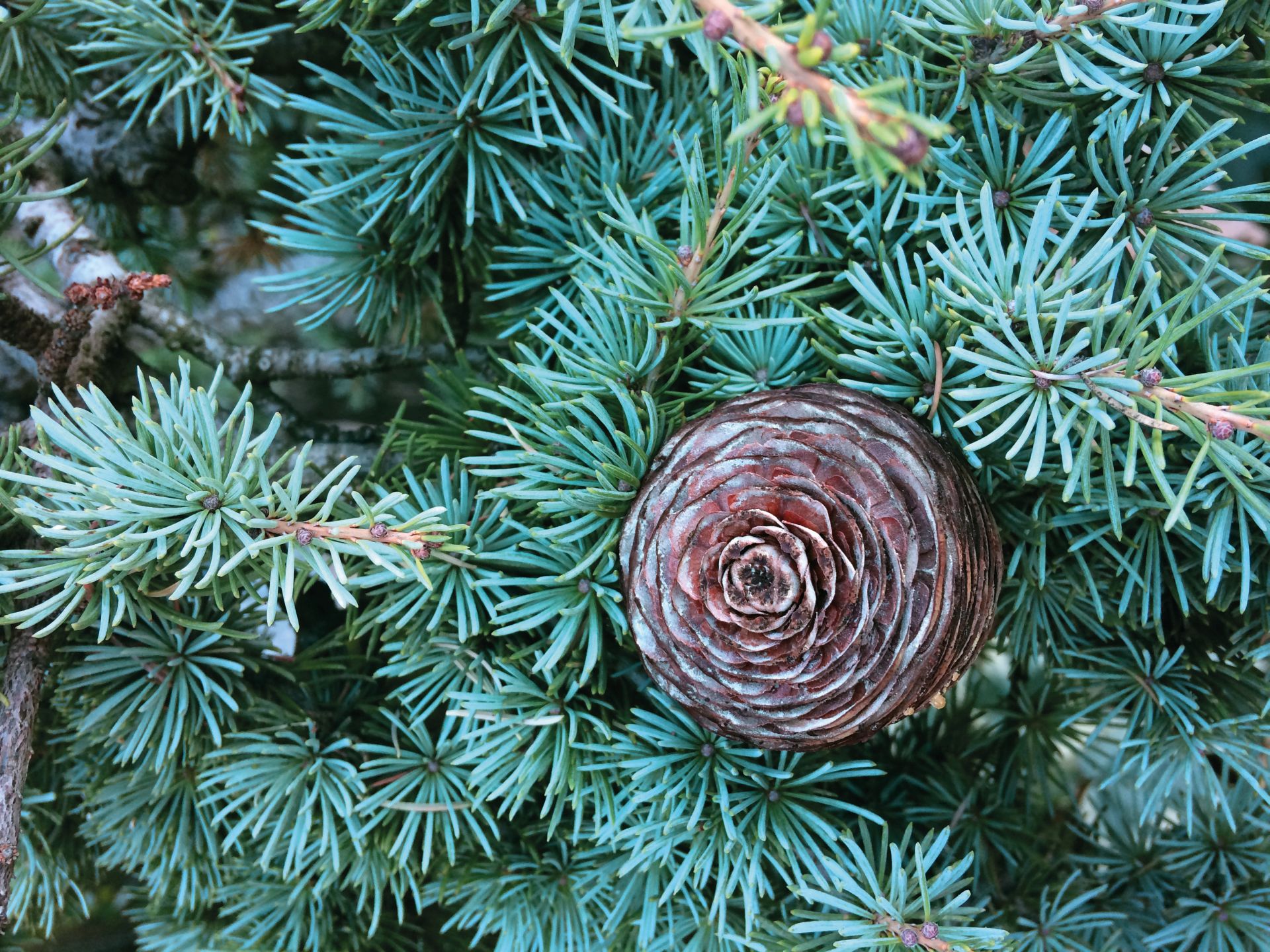 A bit of mythology

The Cedar was considered being the Holy Tree of the World among the ancient Sumerian civilization because of its life-giving forces. It was thought that the Cedar symbolized power, greatness, and immortality and that the Creator had given to the tree the function of a storage chest for the power of the Cosmos on earth.

Ancient mythologies of plants can be considered for us like “signatures” of knowledge. They always have to do something with the intrinsic “healing personality” of the plant – its special role to assist mankind on its way through evolution and its manifold challenges.

Cedarwood was used in all kinds of domains – religious, medicinal, practical for construction, and also as a medium of exchange, often more precious than gold. Seven thousand years old clay tablets discovered via archaeological excavations of the Sumerian kingdom bear witness to this. The summers believed that their God Ea who stood for cleansing the water was the patron of the Cedar tree. Ea was worshipped as the source of the unreachable, hidden wisdom and secret knowledge which he could shower as a gift upon a worthy person.

Another look back into man’s history shows that the Cedar of Lebanon was popular also in biblical times. The sources relate that people in those days held it in high esteem because it represented fertility and abundance, strength and dignity. According to these writings King Salomon had the pillars of the temple in Jerusalem made of Cedarwood from Lebanon. And it was for the fragrance of the wood particularly: the scent of Cedarwood was believed to open the worshipper’s heart for the presence of God. That’s why the people for many centuries made pilgrimages to the legendary sacred groves of the Lebanon Mountains where they enjoyed the aromatic smell of the trees while praying to their God. Today’s Lebanon state majestically carries the Cedar Tree in its flag. And Tibetan Buddhists still use the wood of the Himalaya Cedar as incense in their temple. Cedar is said to evoke the help of angels, especially in need of wisdom.

The ancient Egyptians used Cedar resin as an important component for mummification, cosmetics, and perfumery. The Cedar objects of the sarcophagus of the Egyptian Pharaoh Tutankhamun (1356-11350 BC) were in surprisingly good condition and still carried its wonderful fine scent. The Egyptians also made furniture from Cedarwood because of its antiseptic effect. The antiseptic ingredients – also of the essential oil – repel woodworms and other insects. Among the famous Druids, the forest priests of the Celts, a cup of Cedar resin, was regarded as the Cup of Life.

The pleasant balsamic scent of Cedar fills the air wherever one comes into its presence. Already long ago, as we have seen,  it was believed that Cedar has healing effects on the mind and body. There is a connection between age and healing in Nature. And Cedar trees can become several thousand years old. Around the Mont Ventoux area in High Provence/South of France, thousands of Atlas Cedars have been planted on the slopes of this beautiful mountain to prevent erosion – they will stand there for a while 🙂 to protect the limestone ground with their immortal presence.

The name of Atlas Cedar goes back to the Atlas Mountains of Morocco and Algeria. If ever you travel in the mid-Atlas mountains you can “make an appointment” with thousands of these absolutely amazing tree-giants and meet them in their natural habitat.

Cedarwood oil Himalayan is very near to the Atlas Cedarwood oil. One biochemical compound called ?-cedrene is however only present in the Himalayan Cedar oil. The tree grows mainly in North India (Himachal Pradesh), Pakistan, and Afghanistan at elevations up to 2 500 m. Similarly, as the Atlas Cedar, the oil stems from steam-distillation of the wood saw-dust – and in case of the Himalaya Cedar mainly – as I had noticed from hundreds of thousands of tree stumps, the remains and sad witnesses of a brutal over-exploitation of the Cedar during centuries.

Yes, Cedar Trees may justly be regarded as storehouses of energy. They pick up enormous amounts of light radiation from the sun, moon, and stars through their long life cycles. And even more so from their “pranic” environment – far from the cities on higher altitudes – and transform all this into life energy through photosynthesis.

And then: All living beings benefit from this alchemy of transformation. Bio-spiritually expressed: Plants fulfill the task of converting light into life, human beings are given the task of transforming life into conscious awareness. This realization shows that there is no separation between the inner and outer. Everything is connected: The outer sun functions as a source of the “inner sun”, the light of life is omnipresent. And plants have their most amazing role in this – wherever “life” may appear in the universe.

As to the essential oil…..

The Cedar oil is relatively thick and the colour yellowish to a bit honey-like. Its fragrance is warm, balsamic, sweet, harmonizing, remaining long on the skin. It carries with it the vitality of the mountain forests. Another essential oil – although very rare – can be derived from the branchlets with needles. These latter are arranged in clusters of rosette form which is very specific for the Cedar trees. As a signature reading of Nature would say: star-like formations of needles indicate a whole number of elements – for example symbolizing harmony, showing healing abilities, indicating strength and life-giving forces for body and mind… And what is interesting also: the cones of the Cedar are always standing up, never positioned horizontal on the branches or vertically turning downwards like in most of the conifer species – another symbolism of the uprising strength of this majestic tree.

It is always fascinating to see nature expressing its messages of connection also within the structure of its outer appearance. We can meet the rosette form within the human body as well, for example, the nerve cells, the nerve cords of the solar plexus, and the synapses of the brain. And from here one can say:  if a certain principle exists repeatedly at some level it exists universally – nothing less than “fractals” of all-pervading creative intelligence. Another famous example famous for this is the surface of the walnut kernel which resembles the surface of the brain and provides proteins for the brain.

The ingredients of the Atlas Cedar oil are terpenic hydrocarbons, with a- and b-himachalene as the major sesquiterpene compounds. The genus Cedrus covers 3 different species today: Atlas Cedar (Cedrus atlantica), Lebanon Cedar (Cedrus libani), and Himalaya Cedar (Cedrus deodara). They should not be confounded with the American so-called Texas- and Virginia Cedars which are actually trees belonging to the Juniper genus (Juniperus Virginiana i..e). These species have a very different biochemical profile in their essential oils where cedrene, thuyopsene, and cedrol are the major compounds.

Here a few therapeutic effects of the “true” Cedar oils :

Some scientific and medical research 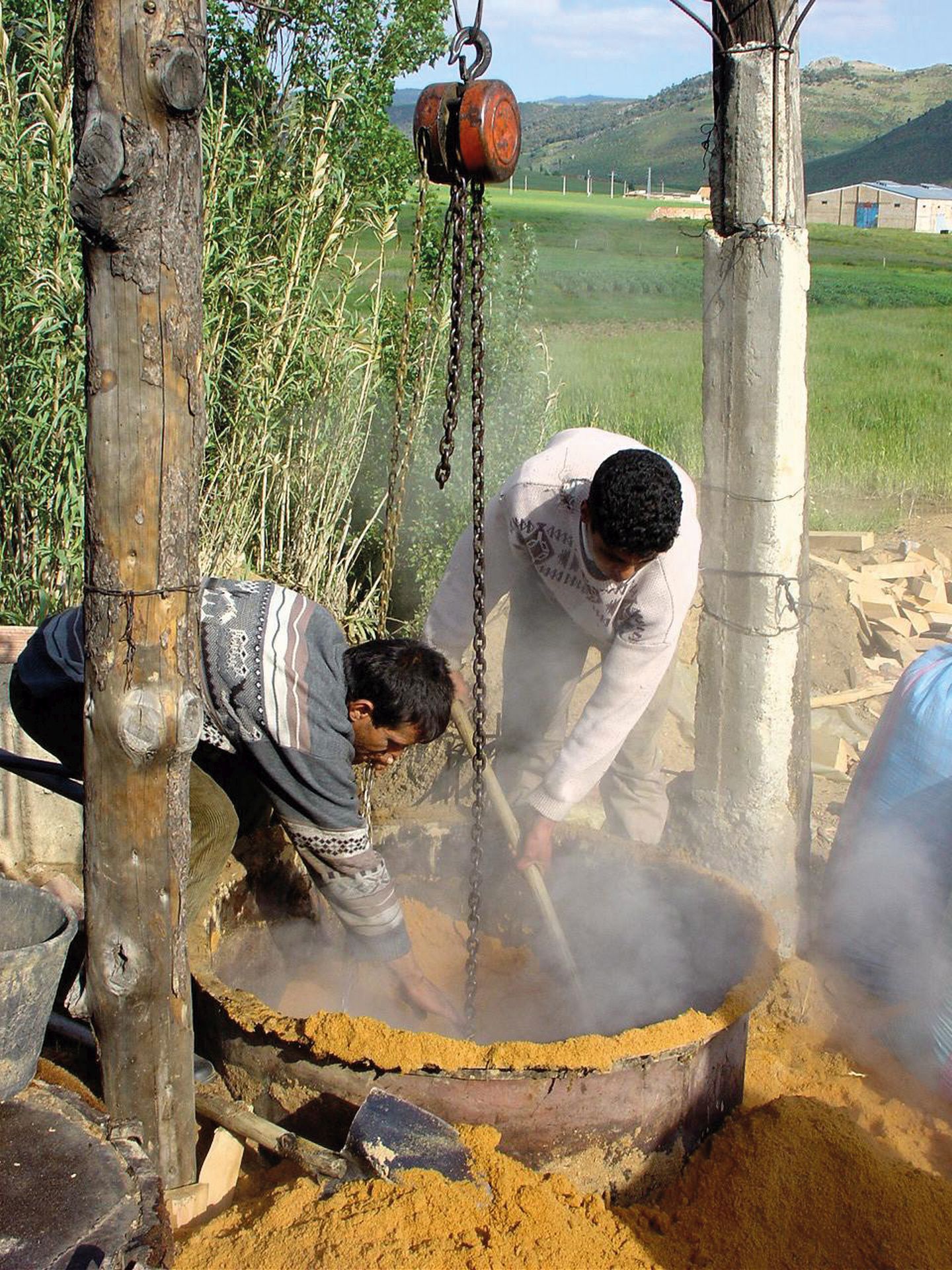 Use: Apply in light massages morning and evening, just after washing – (D. Festy)

Use: 2 to 3 applications per day until marked improvement. – (Dominique Baudoux)

Using an essential oil will bring about the best results if we are able to enter into communication with it – which means for me: to accept the gift of the plant with gratitude.

Summing up it can justly be said that the Cedar tree has a very special place among the healing plants. As to its essential oil, we may add: it has taken time for the Cedar tree to maturation. A tree does not have “automatically” essential oils or resins. They are the results of the long “labour” of evolution through endless corridors of time.  The stronger impulse of the “heat element” or – as the alchemists would say: the “sulfur principle” – has first to make its dominant appearance in the plant kingdom. And this happens in principle from the “top”, the flower or the reproductive organ of the plant – and then from here it gets directed into the other “organs”. And this can be the leaves, the wood, the bark, the root… Definitely, the wood is not “hot” by itself – but the flower IS. According to biologists, the flower is the hottest organ of the plant. Makes sense. And then “sulfur” located in the flower, can penetrate deeper into the structure of the plant and imbibe it with its fire and – maybe – with its essential oil.

As Rudolf Steiner used to say: “In the Rosewood tree the wood starts to blossom”. And this blossoming wood expresses itself so beautifully in the wonderful Rosewood essential oil. So then, we can say not less: in the Cedar tree, the wood starts to blossom or – going even further – in the (usually cold) roots or rhizomes of plants, some of them can also “blossom” and become “warmed up” with essential oils….. “Yes”, says the Spikenard, “yes”, says the Angelica, “yes,” says the Curcuma, the Ginger, and so many others, some of them adding even colours to their “vegetative” cool existence.

So, let the cosmic fire or AGNI (sanskrit for “fire”, “cosmic light”) do its trick in the Plant Kingdom and allow this amazing transformation into essential oils to revitalize our energies with the OJAS or subtle energies from the cosmic radiance of the Universal Spirit of Life.