One cannot be indifferent to the fragrance of this one-of-a-kind essential oil. Patchouli is an amazing oil that brings you to the depth of the earth, grounds you – and thereby leads you back to the body. The name “Patchouli” derives from Tamil language (South Indian), “patchai” meaning “green” and “ellai” denoting “leaf”. Yes, this “green leaf” oil – once so popular during the Hippie time – has many secrets and wonders waiting to be revealed or rediscovered…

A species of the genus Pogostemon, Patchouli belongs to the Lamiaceae plant family, the same group to which Lavender, Basil, Sage etc. belong. It is a bushy, perennial, peppermint-leaf-like herb with erect, sturdy, hairy stems reaching about 0,75 meter in height and bearing large, slightly furry and surprisingly fragrant leaves. The flowers are greenish white, often with a lilac touch. The herb is native to tropical regions of Asia, especially Malaysia, Indonesia, and India, but today it is extensively cultivated also in China, Taiwan, Philippines, Thailand, Vietnam and even in West Africa. The plant gets cut two or three times per year with the leaves harvested during the rainfall period producing the best quality.

The scent profile unfolds intense woody-balsamic, earthy, exotic and sometimes smoky features. There are notes of Amber, Vanilla and Rockrose (Cistus) which come with it. The fragrance of the essential oil improves progressively with age giving rise to a more well-rounded scent quality.

The essential oil is obtained through steam distillation of the dried, slightly fermented leaves yielding 2-3% of essential oil. Due to the long duration of 8–11 hours of distillation this standard processing often causes so-called “thermal degradation“ of various compounds in the oil. Quality batch control “from the source“ is therefore an important factor when acquiring Patchouli oil. It has been shown that supercritical carbon dioxide (scCO2) extraction provides a higher yield and a better quality of the oil.

The chemical ingredients of Patchouli oil are mainly sesquiterpenes and sesquiterpenols which explains why the oil is relatively “heavy” and dense in its texture – a feature which one would not easily expect from a “green leaf” oil….

In our times Patchouli underwent an increase in popularity in the 1960s and 1970s in the USA and Europe. It is still a preferred scent among the members of the counterculture. Nowadays the essential oil is widely used in the perfume industry – also due to its “base note” character, meaning: its ability of slowing down or holding back evaporation of other essential oils in the perfume blends so that their scent can be kept for a longer period of time. 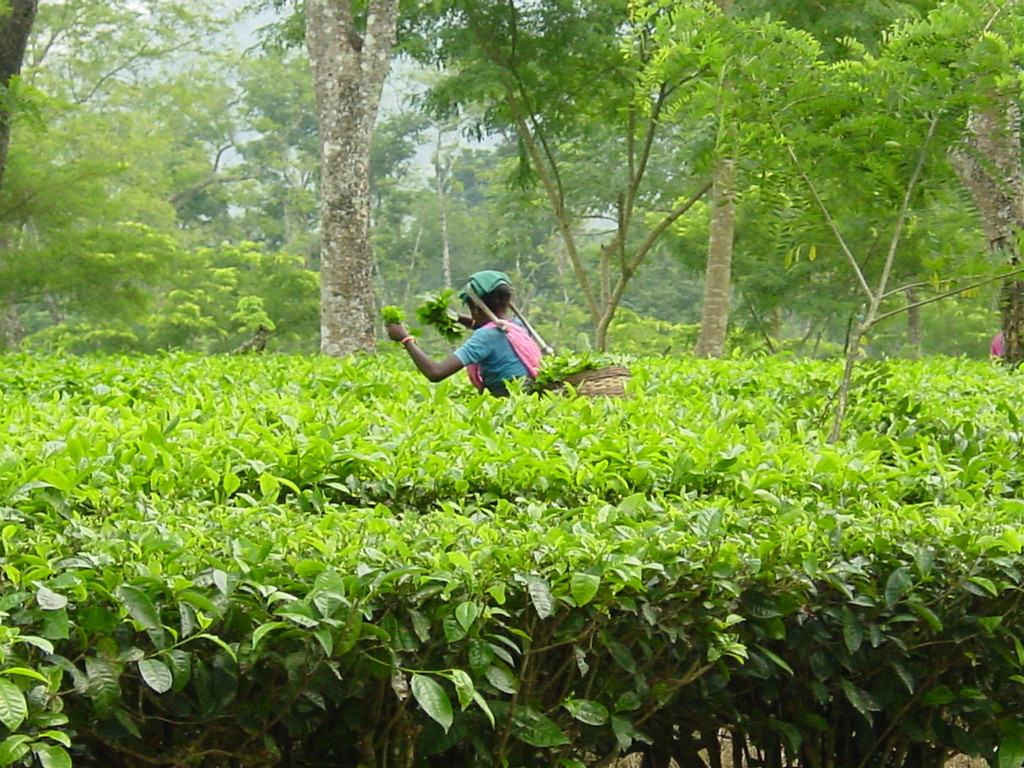 Due to its insect repellent properties Patchouli was used by silk traders traveling to the Middle East and Europe. They packed dried Patchouli leaves between their silk cloth to keep moths from depositing their eggs on the textiles. Thus, the fragrance of Patchouli was omnipresent in Indian fabric and clothes during the 18th and 19th century.

With its strong musky-spicy ground notes Patchouli oil sticks out from the panoply of essential oils. Certainly due to the large variety of heavier compounds (mainly molecules with 15 carbon atoms) its regenerative, purifying, and tonic effects on the skin (acne, herpes, cracked skin etc.) are remarkable and have been well described – also in folk medicine of Asia. Patchouli’s astringent effect helps to prevent premature aging of the skin – it acts as an excellent tissue regenerator which makes it also useful against sagging skin, varicose veins, and even an interesting helper in case of hair-loss. The oil shows strong effects against inflammations, especially when resulting from fever. It is also often used in case of arthritis and gout – and, not unlike numerous other essential oils, Patchouli oil fights well certain fungal and bacterial infections. Moreover, the oil has good wound-healing and antiseptic properties, and is an excellent diuretic.

In aromatherapy Patchouli oil is a qualified mood balancer when overwork, extreme mental activity and stress have weakened the immune system and when body, heart and mind need more strength.

Experience shows that Patchouli oil is a good helper when people suffer from insomnia and depression. It allows them to get over the feelings of sadness or loss, uplifts emotions, makes one overcome disappointment, and eases built-up tensions. This is particularly due to the fact that patchouli oil has a good influence on our hormonal balance. By stimulating the release of pleasure hormones like serotonin and dopamine, feelings of anxiety, anger, and sadness simply disappear.

Just by merely inhaling the oil of Patchouli helps us to ground our mind and to give us the feeling to be “incarnated”, meaning : to be connected back to the earth. And with this power of grounding we are able to focus our attention on the beauties of the outer and the inner worlds simultaneously. No surprise that Patchouli is a good helper for anchoring the mind during and after meditation. With its warm character it uplifts the heart, energizes the nerves and gives rise to the desire to be “here” and to enjoy the world in a more balanced way.

Based on its pheromone character the herb and its oil may act as an aphrodisiac. Here the special alchemy of the plant works in two ways combining the aphrodisiac quality with its anti-depressant effect. The subtle energies are naturally uplifted and the fantasy can spread its wings.

Patchouli is truly a “magical leaf “ plant – and so distinctly different from the usual odor profiles of this plant group (Lamiaceae) ! Nobody would expect such rounded, filled-up earthiness of fragrance when looking at the plant. But a little “touch and rub” of a leaf makes the hippocampus in the brain turn “salto-mortale” with surprise. Yes, all these incredible fragrances of Mother Nature ! Primordial secrets of evolution, ancestral rivers of knowledge streaming together into the global ocean of ethno-medical healing – always there to make our journey on Earth deeper, and more and more enjoyable.

Some testimonials about Patchouli

“Helps my breakouts, and helps me sleep. I also use it as deodorant. It is one of my favourites I put it on my face and chest every night and I don’t have insomnia anymore.” – Brandy N.

“I use Patchouli in my diffusers as a supplement to help battle anxiety and depression as well as for skin.” – Ron K.

“Use it for fevers and to help ground and calm anxieties. Also use in a homemade bug spray. And that is just the tip of the iceberg for me and Patchouli.” – Allison P.

“It tightens loose skin and regenerates new tissue. Mix with other oils if you don’t like the smell, it is too good not to use!” – Joyce S.