Synergy means combined energies in togetherness. It is natural for the relative field of life to be expressed in diversity, but this diversity becomes compact in a greater directedness when it is intelligently and harmoniously put together to create new units of wholeness. Thus, a bouquet of flowers finds its charm in a collectedness of diverse flowers, or a meal finds its savour in the combination of different tastes linked together under the creative genius of a good chef. When diverse elements combine in an intelligent way, they enhance each other’s uniqueness so that the total  becomes more than the collection of its parts merely added mathematically together.

Also good natural perfumery uses this synergistic law in order to create olfactive experiences which often are strikingly different from the single fragrant elements combined. Top notes like Bergamot, Lemongrass or Eucalyptus oils with their highly volatile compounds unite with heart notes like Lavender, Clary Sage or Petitgrain to be transformed or rather “enchanted” by base notes like Frankincense, Jasmine, Sandalwood or Vetiver. A good perfume composed with natural compounds  is never a “single odour” experience, but lives from the blend of a complex unity of fragrances put together under the guidance of a refined consciousness and a trained “nose”. It will send olfactive messages to the brain, and this over hours or even days, so that one can  rejoice in a symphony of total experience. throughout the “sequential brain firing” of its compounds. 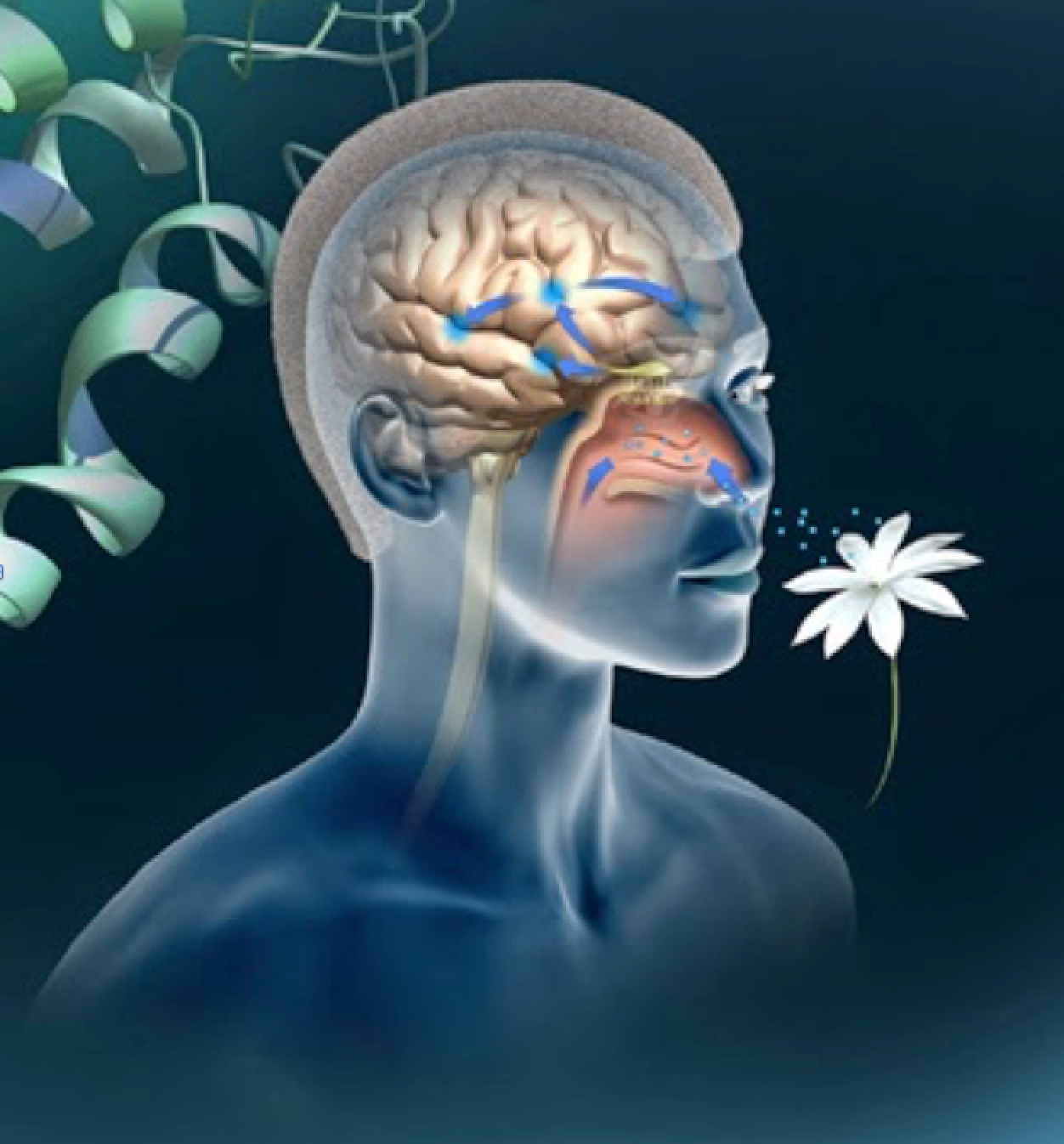 In learning about Aromatherapy and fragrance notes we come to understand that essential oils can be blended together for many different purposes. One of these purposes is to create synergies for therapy, or, let us say, for enhancing wellbeing, health and longevity within the human physiology. Now, within this theme of “fragrance for life” we can follow different lines of approaches, some of them more simple, some of them more complex.

A simple way would be to understand that certain natural bio-chemical compounds found in essential oils have this and that effect and to blend oils which contain a majority of this same compound. The basic similiarity in the bio-chemical profile of essential oils from Ho-leaf, Rosewood, Linaloe Berry and Spanish Marjoram, is that all of them show a high percentage of linalool,  a monoterpenic alcohol. Already this would make a good synergy. We could take advantage of the tonifying, but also highly anti-bacterial effect of this natural plant-linalool in blending these oils together. We should, however, not forget, that the curative effect of plant compounds is not only linked to the dominant “chemotypes”, but also lies in what perfumery would call the “impurities” or trace elements, powerful “minorities”, often hidden behind the impact of the major compounds.

Another approach would be to blend oils from the same genus or vegetal group and with this touch the underlying “plant field” or “resonance” which has been built into this group by Nature herself. For example combine different types of Lavender oils, or different types of Eucalyptus or Basil oils, etc. Although most often very different in their biochemistry and their olfactive notes, all these oils from the same genus follow a hidden line of sameness which can only enhance the desired therapeutic effect.

Similar to this is the method to combine oils from the same specy, but stemming from different “organs” of the plant. For example to combine Neroli oil (flower oil) with Bitter Orange oil  (rind oil) and Petitgrain bigarade oil (leaf oil), all of them derived from the Bitter Orange tree (Citrus auranthium). Or, another example, we could take Angelica root oil, -leaf oil and -seed oil for creating a synergistic blend in order to enhance the anxiolytic effect of this beautiful oil. 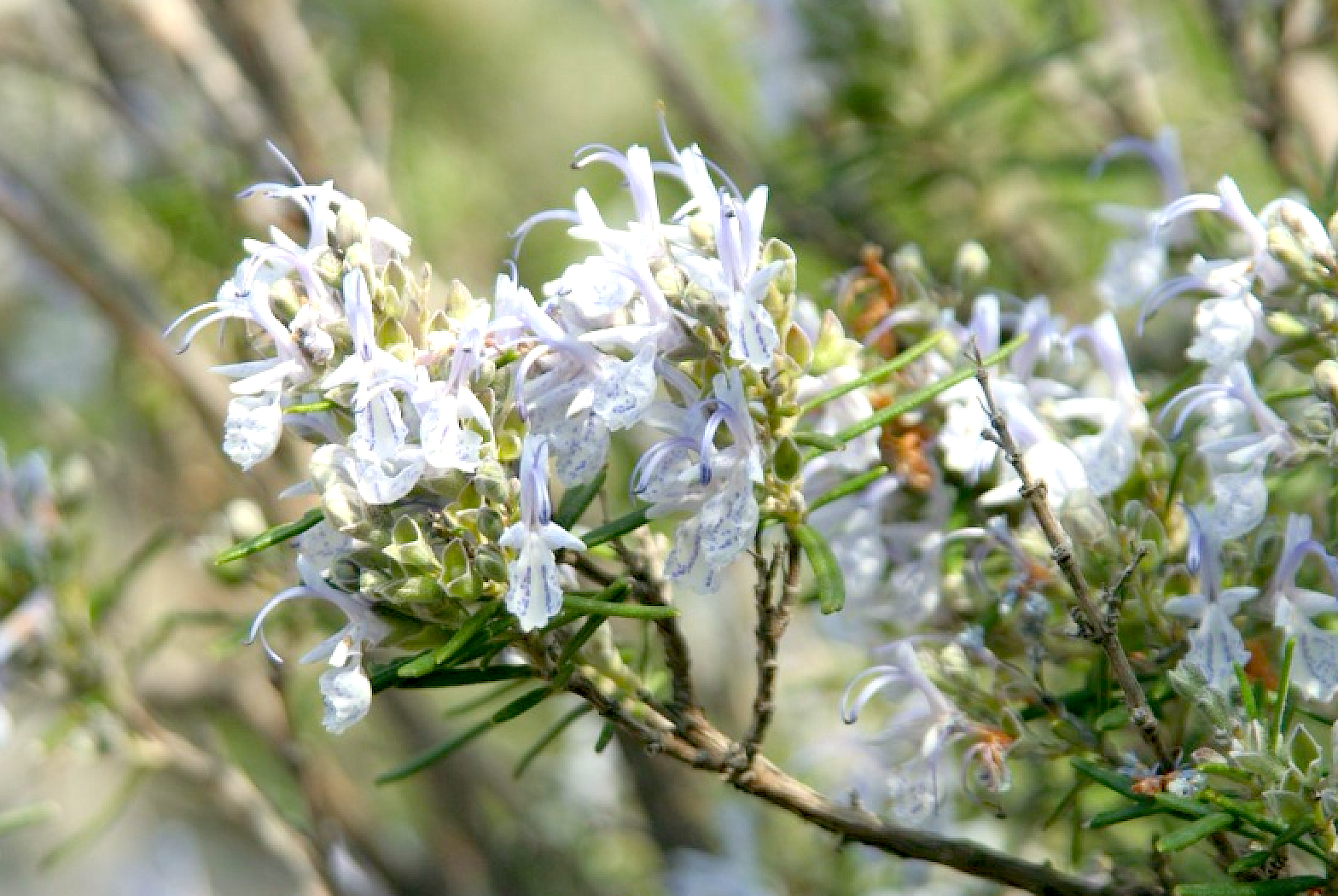 Get directed by ancient knowledge – beyond the symptom

Also, if we follow informations gathered from ancient folk medicine, often based on age-old wisdom (as it was before), we can find guidelines which allow us to deduce elementary laws of Nature from them. Ayurveda, the wisdom of longevity from ancient India, tells us that we have to look at the “doshas” of plants and of the human physiology in order to recreate balance in the system. A physiology which has a tendency to be hot, or – in imbalance – to be overheated, (Pitta dosha) would not be given easily a blend with dominant “Pitta-oils” like Thyme, Oregano, or Savory, but rather a cooling blend with Peppermint, Lavender, Eucalyptus, or the like. On the other hand, if we want for example to enhance the fire element (Agni) in the digestive system, we would tend to use oils which have a certain Pitta-increasing action on the human body like Cinnamon, holy Basil, Clove bud, Anise or the ones mentioned above. 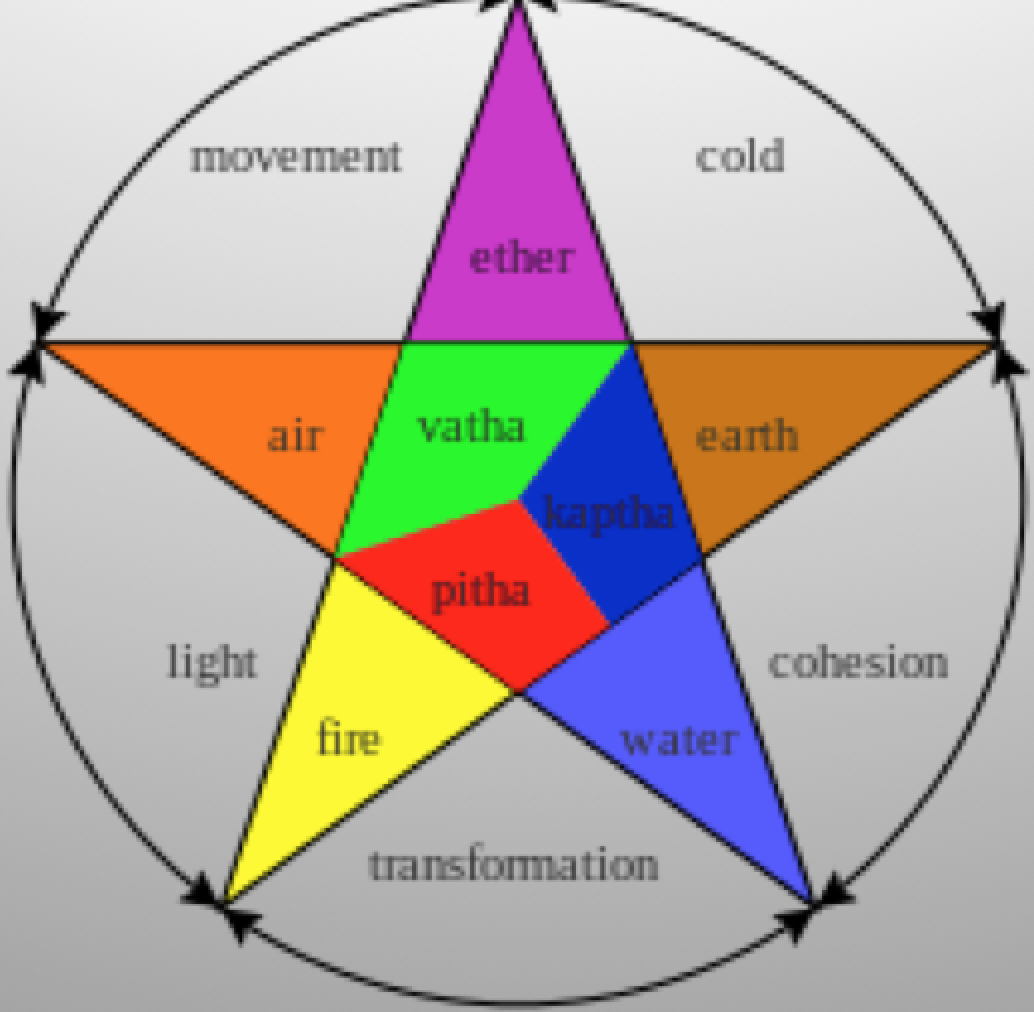 It is often good to blend oils with the perspective to strengthen the physiology so to say in a “multiple stroke”. A blend to help digestion for example will not only focus on the stomach or the intestines but also try to give relief to the liver and also possibly to the gall bladder. And a blend to help against insomnia will not only calm the mind and soothen the nerves, but also work on underlying problems like depressiveness or negative emotions and may also include oils which have an “opening” anti-spasmodic effect. It is the overall feature of synergistic Aromatherapy to target different layers of the same problem and not – like in allopathic medicine – remain stuck with the symptom alone. So to say: We do not put cortisone on a rash of neurodermitis, but we look after the hidden source of the problem and try to synergistically treat different psycho-physiological levels at the same time.

We should not forget that an essential oil in itself is already a synergy of – in most cases – numerous bio-chemical compounds. Over millions of years, Nature herself in creating (and testing !) plant life has invented countless elements, often put together in a synergistic way in this or that plant, so that one plant often can take care of many different functions simultaneously. Each plant and each oil has numerous healing efects pertaining to its specific energy field, which finds its outer expression through colour, shape, size, fragrance, compounds etc. These compounds match with the human organism in an intrinsic way like key and lock and can fill up specific “holes”, created by weakness or disease within the normally frictionless flow of energy throughout the physiology. The complex structure of these compounds is also the reason for the multiple healing effects of one and the same essential oil. Lavender oil was considered a panaceum over centuries by the people in Provence. It was effective against cuts, burns, headaches, insomnia, eczema, indigestions, bronchitis, fever and cold, etc. etc. Nature is in herself the best example for combining certain molecules and thus creating an enhanced synergistic healing effects. A good example is Lemongrass oil (Cymbopogon citratus)

“The antibacterial properties of the essential oil have been studied. These activities are shown in two of the three main components of the oil identified through chromatographic and mass spectrometric methods. While the alpha-citral (geranial) and beta-citral (neral) components individually elicit antibacterial action on gram-negative and gram-positive organisms, the third component, myrcene, did not show observable antibacterial activity on its own. However, myrcene provided enhanced activities when mixed with either of the other two main components identified.” (cf. “The School For Aromatic Studies”)

Onawunmi, et. al. on the “Antibacterial constituents in the essential oil of Cymbopogon citratus”.

On the other hand, chemical treatment of plants with substances such as lherbicides, pesticides, chemical fertillizers etc. – this has been scientifcally shown – tends to decrease the richness of the phyto-chemical compounds and therefore diminishes the multiple healing effects of the plant. 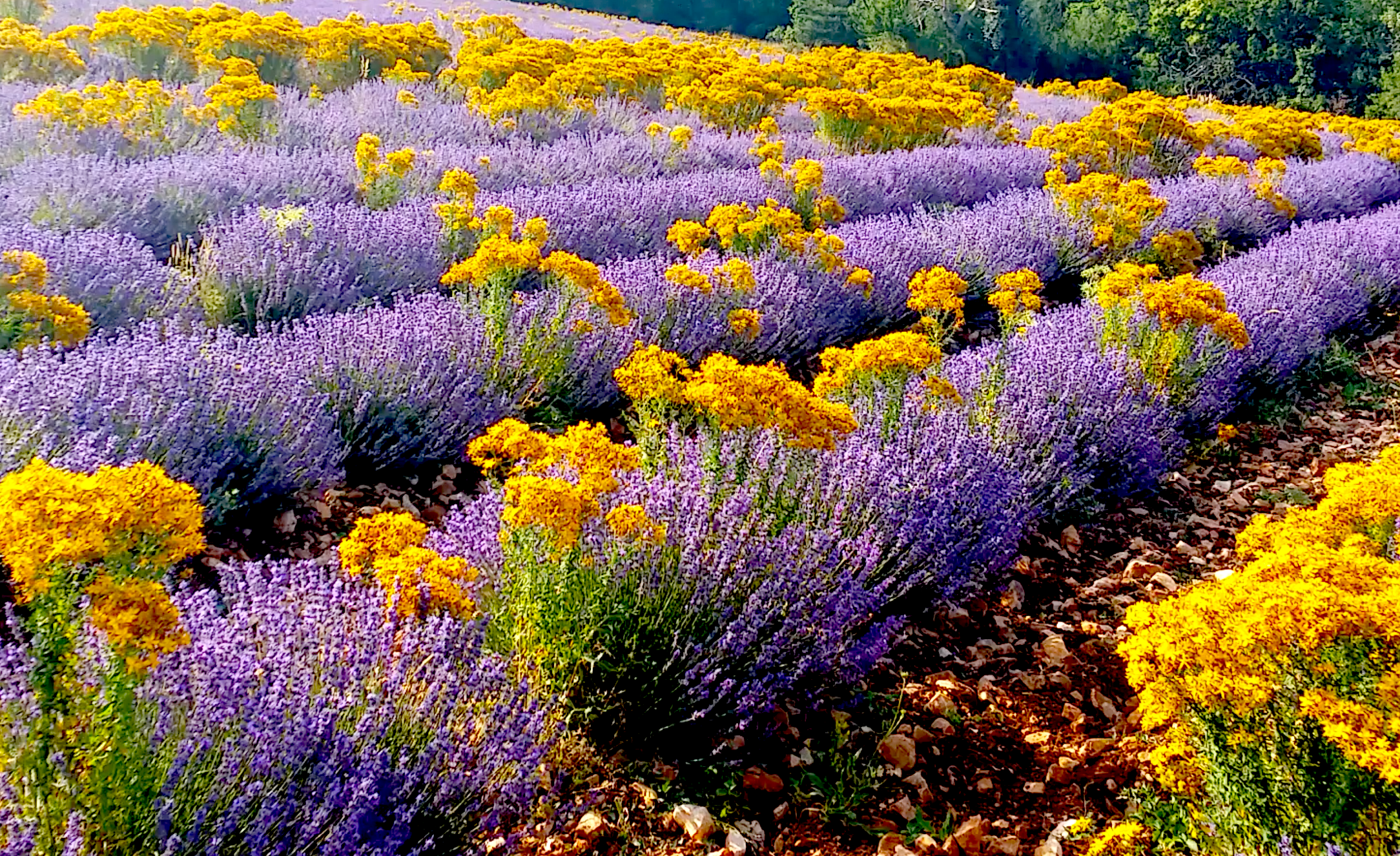 Richness of compounds versus the isolation of “active ingredients”

Now, if we analyze these few examples we find that the main reason for the synergistic approach in modern Aromatherapy is to increase diversity in unity. We want to create a specific effect, and in order to create it, we need to introduce complexity in an intelligent way, without disturbing the natural balance. Contrary to the allopathic approach, which tries to isolate the active principles from a plant and then, in a second step, tries to synthesize the same, Aromatherapy goes hand in hand with Mother Nature, honouring and maintaining the infinite complexity of its creations.

Isolating certain compounds and finding them toxic is a very childish approach of modern pharmacologists to prove that this or that essential oil is hazardous. Nature has already – within this complexity – provided all the means to balance certain compounds against certain others, so that the totality of compounds of an oil usually is available in a humanly in-offensive way – provided that the right dosage is respected. What did Hippocrates say ? “Everything is toxic – nothing is toxic – it all depends on the dosage.”  Seen from the therapeutic angle, complexity increases the chance for healing and prevents unwanted side-effects. Of course, so many compounds in Nature, tens of thousands one can easily state, have

*  not been explained with regards to their healing properties

* not been analyzed in a scientific way

* not been fully understood in their interdependace and mutually enhancing dynamism

This does not give us the right to assume that they are useless. And so much, better to say : nearly all of human physiology and its numerous ailments has not been observed in its reactions and possible resonance to medicinal plants.

Therefore – often –  by increasing the complexity in a therapeutic blend, we give our human nature a higher chance to tune in with the principle of diversity in Nature herself and thus heighten the curative probability, meaning : the chance for healing. It is like entering a castle with so many locked up rooms, chambers, halls, corridors. The more keys you have we have with us, the greater will be the chance to unlock the secret doors and enter the castle.

That’s why, in the final end, in creating one’s aromatherapy formulas, or finding the right ones in the market, one can take always inspiration from Nature and from those who were and are connected to Nature’s wholeness. Nothing has to be invented or just randomly put, one can say; we just need to to do the correct “reading” : An effective synergy should be based on ancient folk medicine and experience, confirmed – if possible – by modern Aromatherapy research, reliable testimonials and – of course – profound studies of the subject itself. This “blending” of ancient and modern seems to me the most thorough way for a powerful and effective plant medicine of today and tomorrow.