The legendary precious Myrrh oil (Commiphora myrrha), derived from sun-charged tropical resins, is used since Antiquity in sacred rites and for its rejuvenating effects on body and mind. Native from Eastern areas of Africa, the essential oil is obtained by steam distillation of the resin from a thorny shrublike tree. It has a spicy-warm, earthy and slightly sweet aroma with a bitter taste.

A jewel in modern aromatherapy with its multiple benefits extending from wound healing, to skin care to tonifying the circulatory and immune system, Myrrh is also a great ally for feminine health. 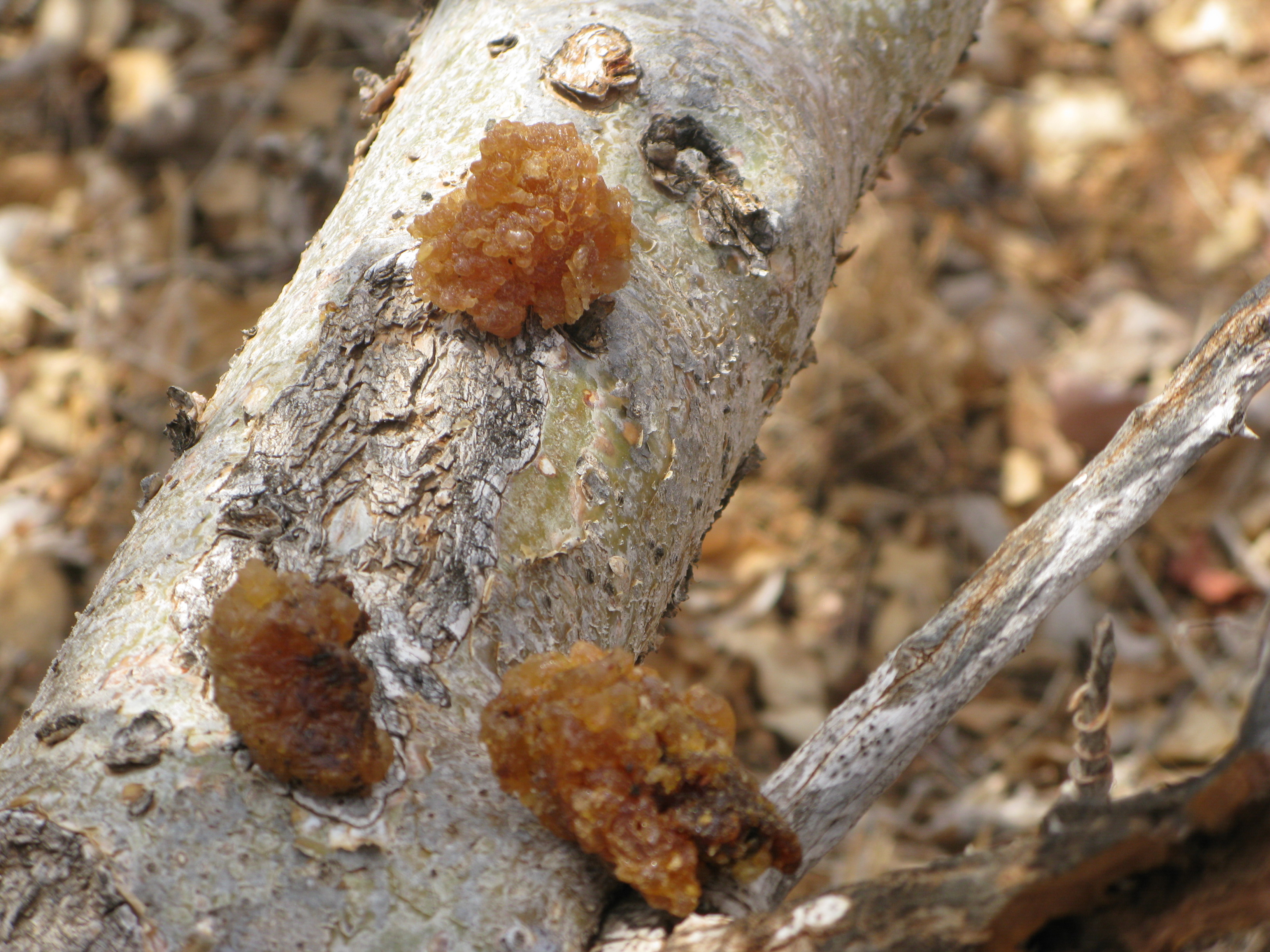 Greek soldiers knew about the proven healing power of myrrh carrying the fragrant globules in their combat gear. They used the resin for swollen parts of the body, for preventing the spreading of infections from wounds and as an accepted pain-killer in case of bruises and sprains.

Myrrh’s antiseptic and anti-inflammatory properties make it a choice oil to have in your travel kit. It will prevent any small cuts or wounds to become infected and can be applied directly since it is very well tolerated by the skin. Like many of the resin and balsam oils such as Benzoin, Frankincense, Myrrh oil forms a protective barrier over the wound, acting as an antiseptic “Band-Aid”. In an emergency one should not forget to put a few drops of the oil directly on a scrape, as it is one of the least irritating oils. It can furthermore be used for ailments such as eczema, pressure sores, hemorrhoids. Sometimes sold as “White rock opium”, Myrrh was the most popular pain reliever before the discovery of opium.

Myrrh essential oil can be used for its anti-microbial effects, in case of fever, food poisoning, cough and cold and bronchitis. Used in mouthwash solutions, it is beneficial to gums and in case of bad breath, mouth ulcers and gingivitis.

Myrrh oil also acts as a fungicide in case of either internal or external infections.

Given all these properties we can understand the use of Myrrh in ancient Egypt for embalming and preserving the bodies of pharaohs.

Myrrh oil is excellent to stimulate blood circulation and to ensure proper supply of oxygen to the tissues thus regulating the metabolic functioning and boosting the immune system. Traditional Chinese medicine considers Myrrh as a blood-purifyer and more specifically as an emenagogue. Indeed, by stimulating blood flow in the pelvic area Myrrh normalizes menstruation and relieves from the related mood swings. Excellent for women, this oil should however not be used during pregnancy as it stimulates the uterus. 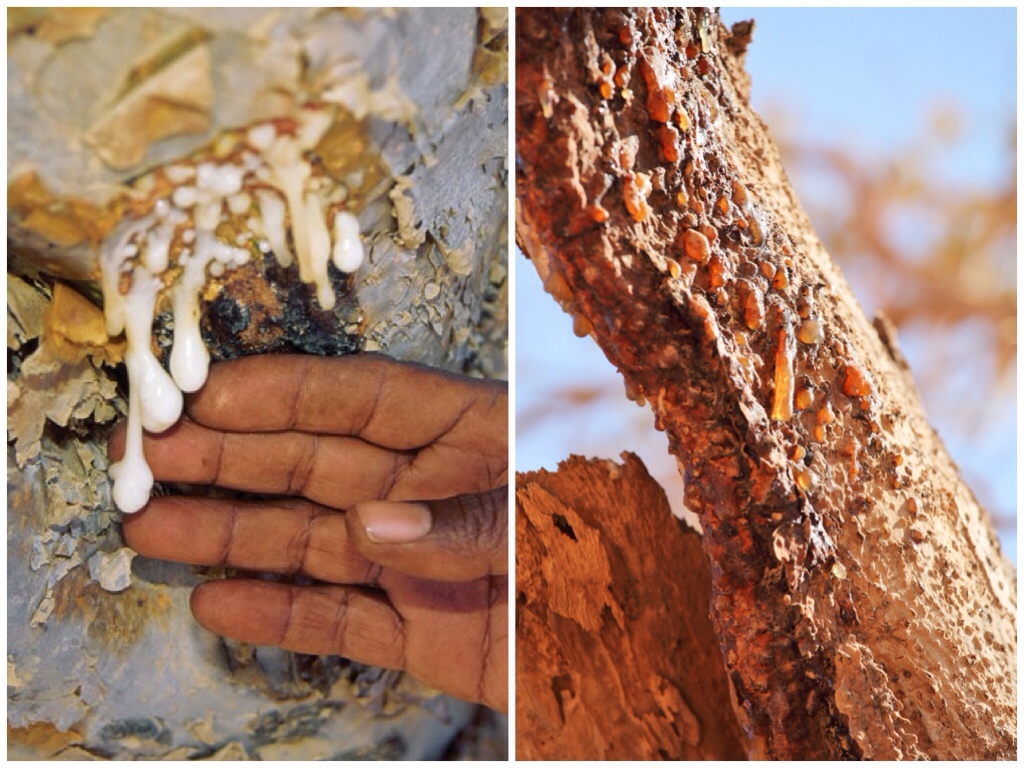 A rejuvenating and protective remedy

In Ayurveda, Myrrh is used in the elaboration of Rasayanas (Rasayanas are natural formulas to promote optimal health) for its rejuvenating, invigorating and tonic properties.

It is also used nowadays in anti-aging cosmetics. As a potent antioxidant, it protects the skin from the damages of free radicals.

With its high content in furanoid compounds (about 20%), normally known as very photosensitive, Myrrh has yet a unique ability to protect the skin against UV radiation, owing to the association of the furanoids with other chemical compounds, especially sesquiterpenes. In ancient Egypt, Myrrh was even used as a sun protector.

Myrrh has also been found to have anti-cancer benefits. A 2011 study (Shulan et al., 2011) found that myrrh was able to reduce the proliferation or replication of human cancer cells. Researchers found that myrrh inhibited growth in eight different types of cancer cells, specifically gynecological cancers. Although further research is needed to determine exactly how to use myrrh for cancer treatment, this initial research is promising. 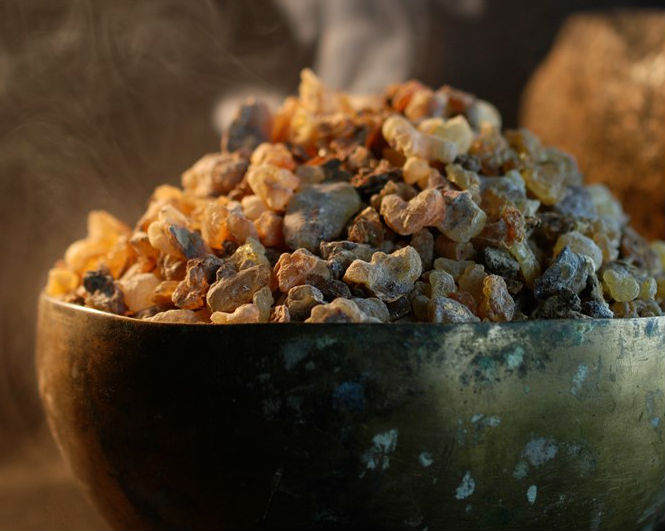 Because of its high content of sesquiterpenes, a class of compounds that have a direct effect on the pituitary gland, hypothalamus, and amygdala, Myrrh oil creates a sense of inner peace, harmonizing our emotions. In 1992, it was discovered that sesquiterpenes and sesquiterpenols (i.e. essential oil of Sandalwood, Myrrh, etc.) break the blood brain barrier affecting the amygdala which is the area of the brain that records and stores emotional trauma.

Upheld as a holy substance, Myrrh, throughout the ages, has been a companion for men and women from many countries to reconcile physical with spiritual well-being. Its magic is being revived today through the amazing ethno-therapeutic exchange between the different cultures of the world under the guidance of modern aromatherapy.

“For over a year, I had a red spotty rash on my face that would not go away. I tried every over the counter ointment, cream, and lotion hoping that it would work.  It was only after I began applying ….Frankincense and Myrrh essential oils that the red spotty rash completely disappeared AND it only took THREE days.  I continue to use these oils every day and the rash has not came back. I am very impressed with their healing abilities.” – William

“I noticed a little circular rash on my daughter’s bottom and immediately knew it was ringworm [fungal infection]. We tried several over the counter methods, chemicals and weeks of treatment before success. I reached out to Stephanie, who is my Naturopath Consultant seeking an alternative. Within two days of applying the recommended Myrrh directly on the affected area it was completely gone. There were no side effects and there was no pain on my daughter when applied. Thank you essential oils!” – Bridget