a miracle healer from the Mediterranean

ROCK ROSE with its Latin name Cistus ladaniferus consists of about 20 subspecies. The name Cistus comes from the Portuguese language where “cesto” means “capsule” or “basket” referring to the capsule-shaped fruits which form after the floral season. Cistus or Rock Rose is not related to the Rose family. It belongs to the Cistaceae plant family. The grey foliated evergreen and very fragrant shrub can reach a height of 1 m plus. The perennial shrub is native to the Mediterranean area where it decorates the dry mountainsides and starts blossoming in early spring.

With its white coloured blossoms, Cistus offers a charming sight to the admiring eye. At the base of each petal, the flowers show maroon-red spots with a white point in the middle. The Cistus bush prefers a sunny climate and sandy soil and is very undemanding in terms of nutrients. Cistus is able to survive cold climate changes and also long summer droughts supported by its property to reduce water evaporation by virtue of its sticky oil carrying layer on its leaves, visible as minute’s cells in form of glossy transparent dots.

Ecologically the plant plays an important role in the case of wildfire as a reforestation manner due to its strong survival abilities. The Cistus variety with its pink coloured blossoms from Creta/Greece (Cistus creticus) is not the one that is used for distillation but rather for the labdanum resin. The essential oil is from the Cistus ladaniferus plant and usually produced in Spain, Portugal, and Morocco. 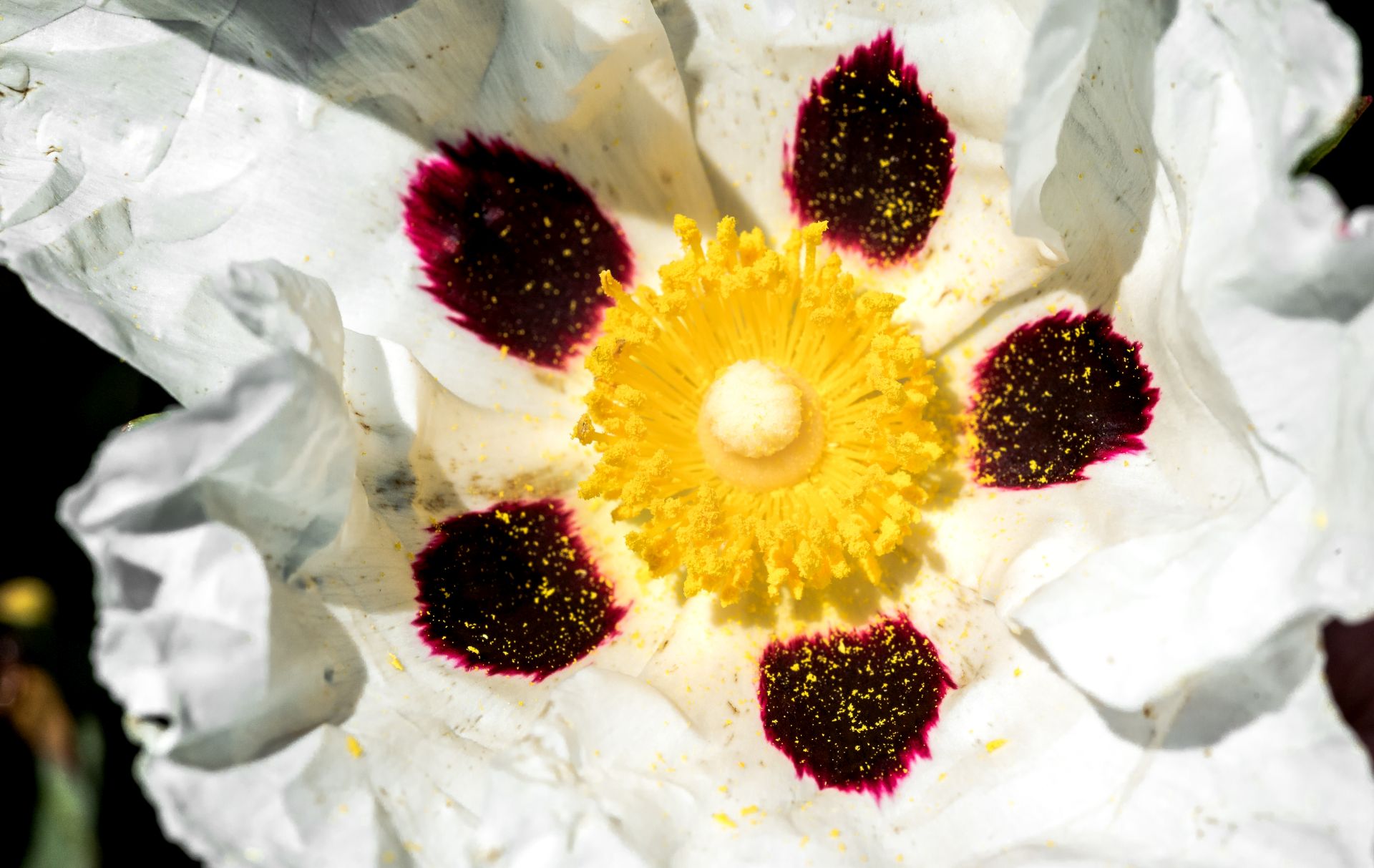 Cistus essential oil is obtained by steam distillation of the ladanifer’s leaves and twigs. The ovoid leaves with their glossy appearance exude a resin called ‘labdanum’. Its fragrance is warm, aromatic, herbaceous, amber-like, and musky. On a hot summer day, one can smell the intense scent spread by the shrub’s resinous compounds stored in its leaves. Cistus ladanifer is the species whose sticky leaves have been used for thousands of years to produce the ladanum resin regarded as a wonderful panacea. In those times people scraped the resin from the fur of goats or sheep having grazed among the Rock roses. The shep-herds collected it from the fur and sold the resinous substance to coastal traders. The fake beards which the Pharaohs wore in Ancient Egypt were in fact the labdanum soaked hair of the animals. 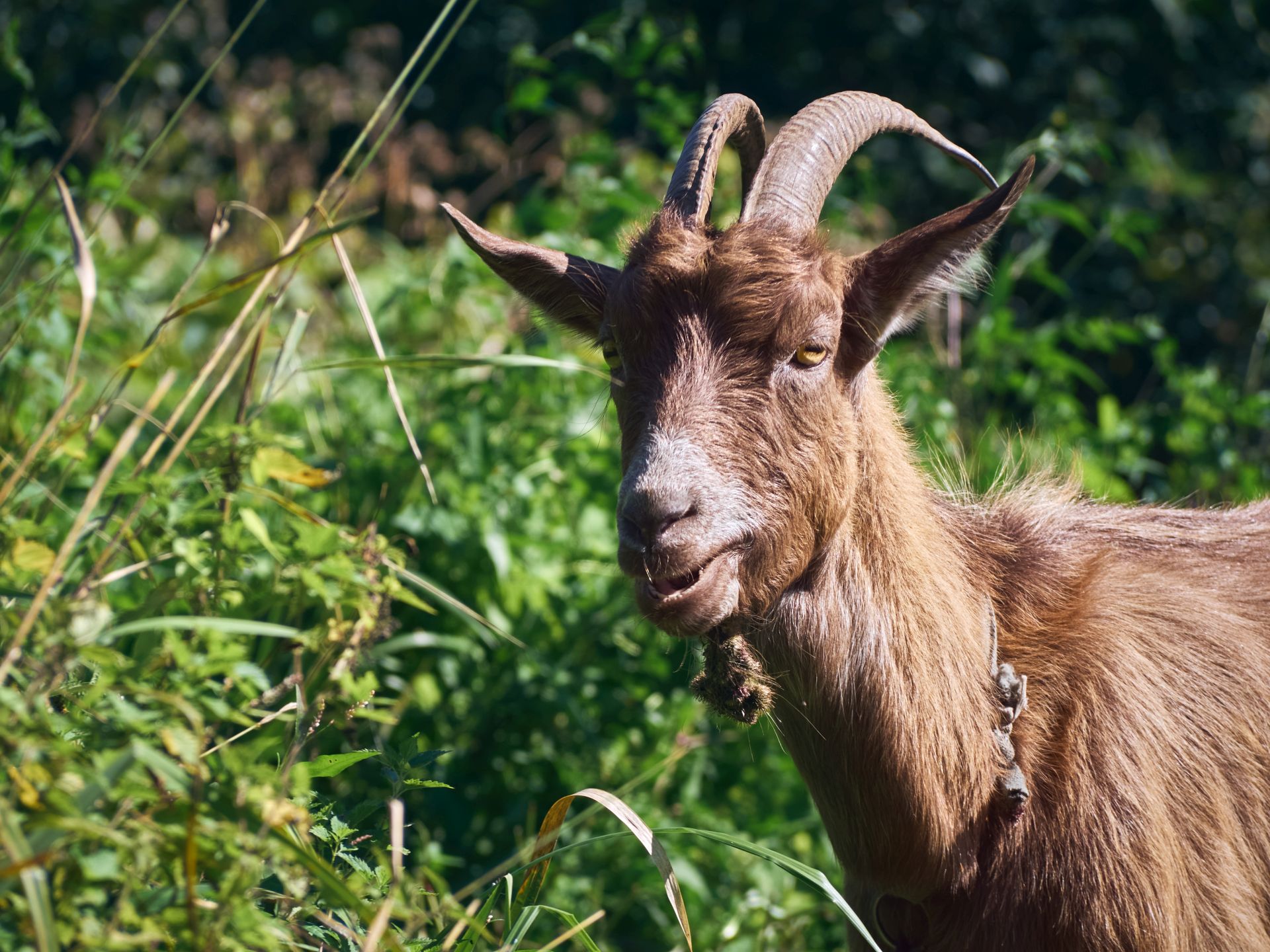 Later, the shepherds used long poles with leather thongs practical to sweep off the resin from the shrubs. The resin sticking to the thongs then was isolated by squeezing it off through sand which was removed later. Some shepherds gave up herding to become labdanum traders instead because it was more profitable. 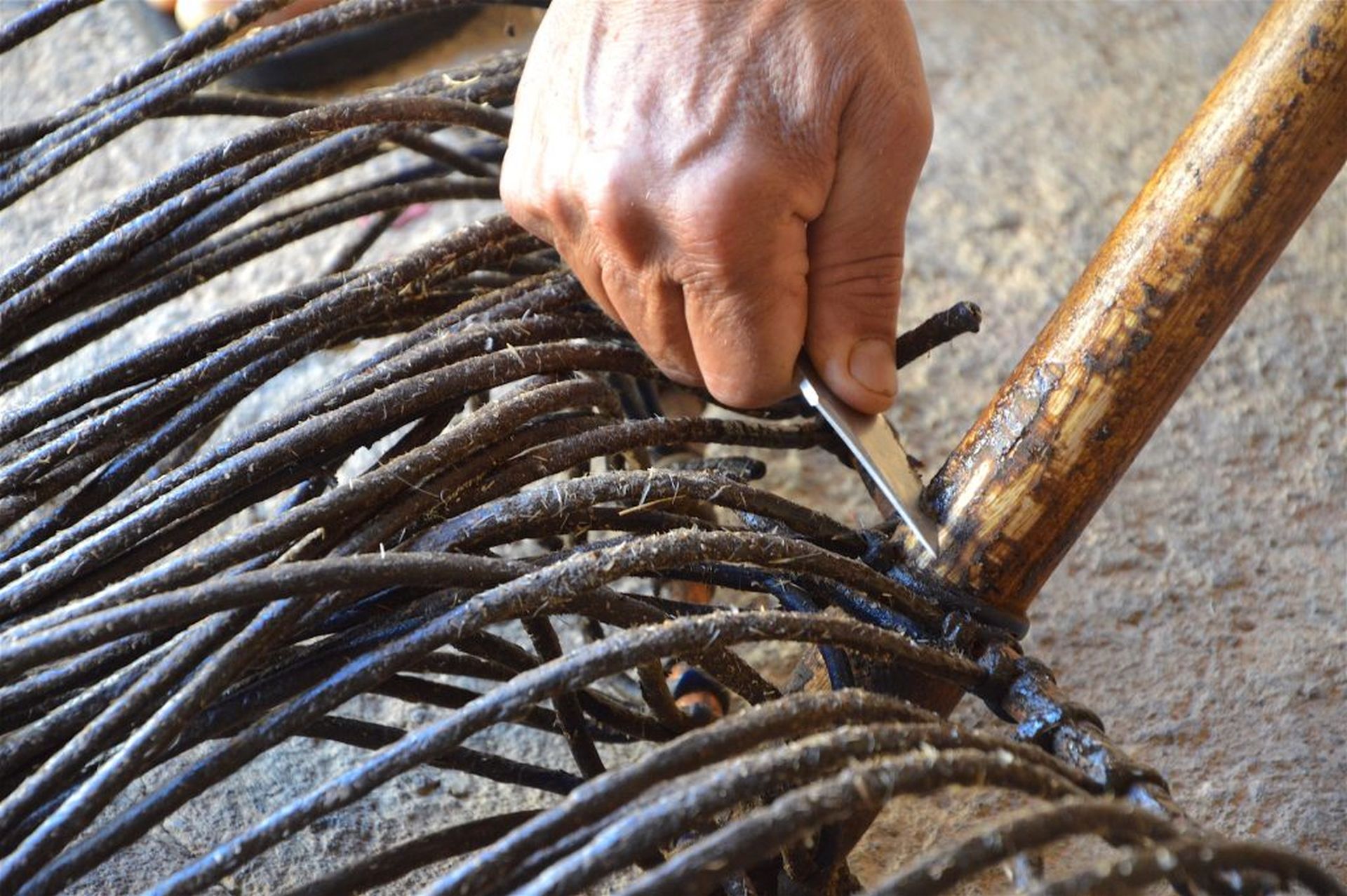 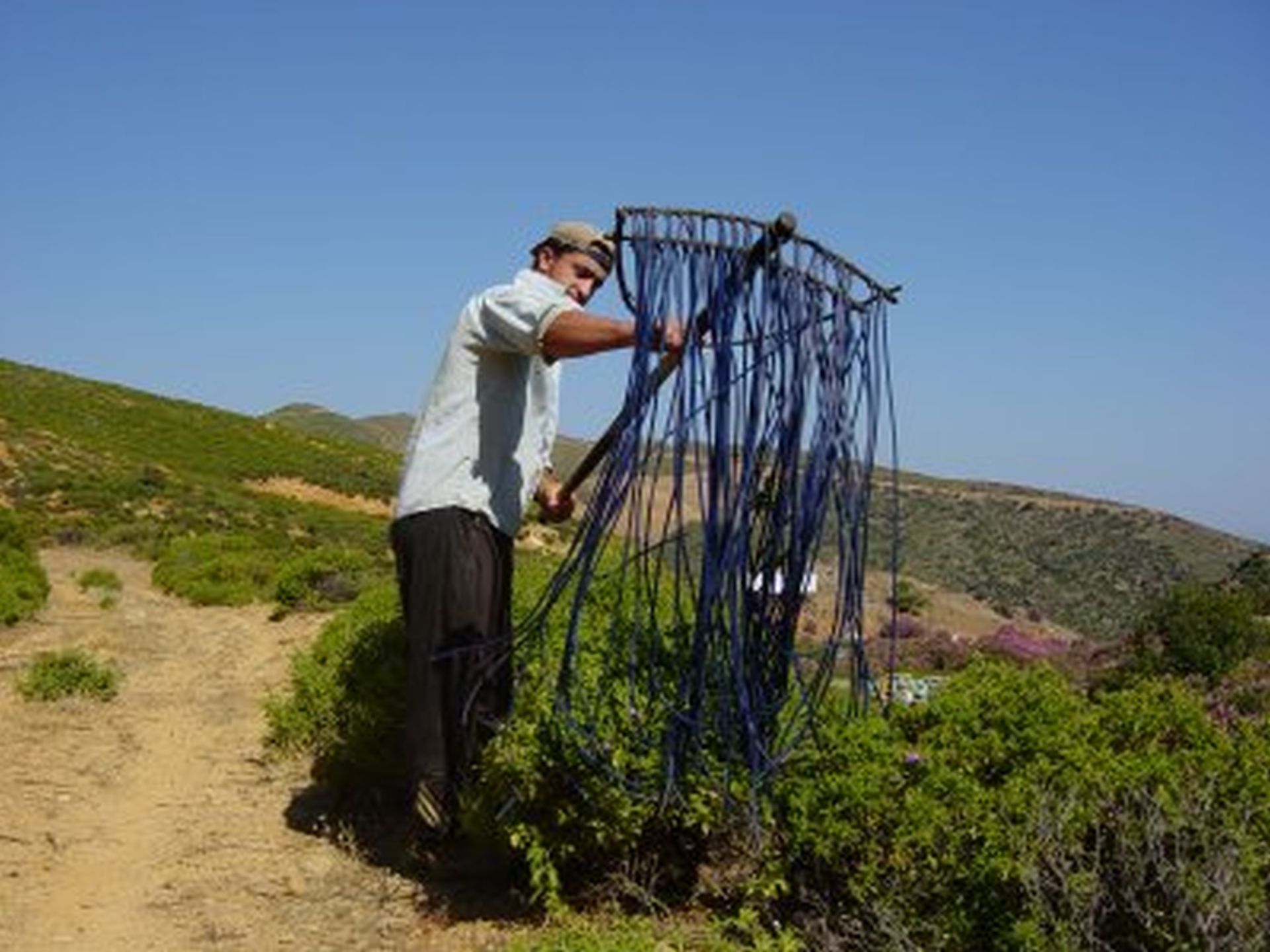 Already in biblical times, the plant was praised for its uplifting fragrance under the name of ‘Rose of Sharon’ because it grew in the valley of Sharon in Israel as mentioned in the song of Salomon 2:1:  ‘I am the Rose of Sharon and the lily of the valley’.

Cistus was also highly sought-after as a fumigant to ward off evil spirits. In fact, apart from medicinal use, it was in high demand for special fragrance blending in those ancient civilizations – and still today it is an important essential component for example in such famous perfumes as Chanel No. 5.

The nomads have used Cistus as a medicinal plant since antiquity to heal wounds, an effect explainable due to its potent antiseptic, anti-bacterial, anti-viral, hemostatic, and cell-regenerating properties meanwhile proven by scientific results. Today Cistus is considered an effective compound in numerous skincare and wellness products – and it is famous for its capacity to make our hair shining. Also, many lotions, cosmetics, soaps, and detergents contain Rock Rose. Nowadays – for example in the case of psoriasis and chronic eczema – Cistus is one of the best natural choices for healing.

As a good source of Vitamin, A Cistus strengthens and protects the skin and acts as a regenerator of skin cells. As a free radical scavenger, it is responsible for its well-known skin-smoothing effects. It also shows good results in treating irritated, inflamed skin suffering from acne or neurodermatitis. If one is prone to herpes, one should try some Cistus ointment. Applied on the skin – no matter what stage – one can almost watch the herpes virus disappear. Hope is also evident here for those plagued by painful shingles.

On the peninsula Chalkidiki in Greece people still today hand down an enchanting legend that goes like this: The deities were assembled on mount Olympus to decide which plants should be given particular healing skills. They soon agreed upon bestowing on Rock-Rose the task of healing wounds of warriors injured during battles by virtue of its resin-covered leaves. Yet the goddesses did not want to accept the decision because they were convinced that a plant carrying such wonderful blossoms should rather serve beauty care. Rock-Rose smiled and promised to fulfill both tasks, which it is doing still today.

Cistus oil is excellent to deepen our meditation. It enhances focus and inner calmness. On the emotional side, we find Rock Rose also among the Bach flower remedies. It is described as beneficial in case of panic attacks, shocks, and fear-creating experiences. This is the same for essential oil. Cistus is able to dissolve physical or psychic blockades like callousness for example and reorganize vital functions in the nervous system. Not a far-fetched idea that the sticky labdanum oil may symbolize the stickiness of traumatic stuff in us that so often is very stubborn or inaccessible as to an effective therapeutic treatment. Yet – if successfully touched – a special sleeping “Rose” in us may receive the right impulse and unfold its hidden blossoms…..

Looking from the spiritual side of our being we can say that holding on to pain prevents our potential from getting free, unfold our inner potential. This is especially interesting in case of pain brought about through injustice or betrayal. Meanwhile, scientific research exists which shows that readiness to forgive reduces our cortisol reaction. Cortisol is a hormonal substance that can cause disorder in the body when overproduction takes place.

a Cistus oil from a small bottle has its immediate effect because we know: smell perception is wired straight to the brain without any deviation…

Thus the fragrances of essential oils are directly transported to the limbic system which passes them on to the pituitary and the pineal gland, And from here in turn they are transmitted to the amygdala, our “stress and anxiety switch”, where memories of fears and trauma are stored. Thus, the fragrant sensual perception – let’s say of Cistus in our case – with its heart-opening effect is able to unlock those blocks and trigger the awareness for positive feelings like forgiveness, compassion, etc… This effect on the emotional level is maybe the best way to enter into the process of healing. The healing power of following the “psycho-spiritual doorway” cannot be overestimated. It is certainly truly human to be caught by errors – and it is divine to detect and face our errors – and to use them for our evolution. Medicinal plant oils can help us in so many different ways. This means in our case here: the Rock Rose “rock” us from inside and give us support to reach beyond duality – to reconnect with our divine determination as a soul unraveling a sparkling thread of the Supreme Being revealed in its Love to the true human in us. 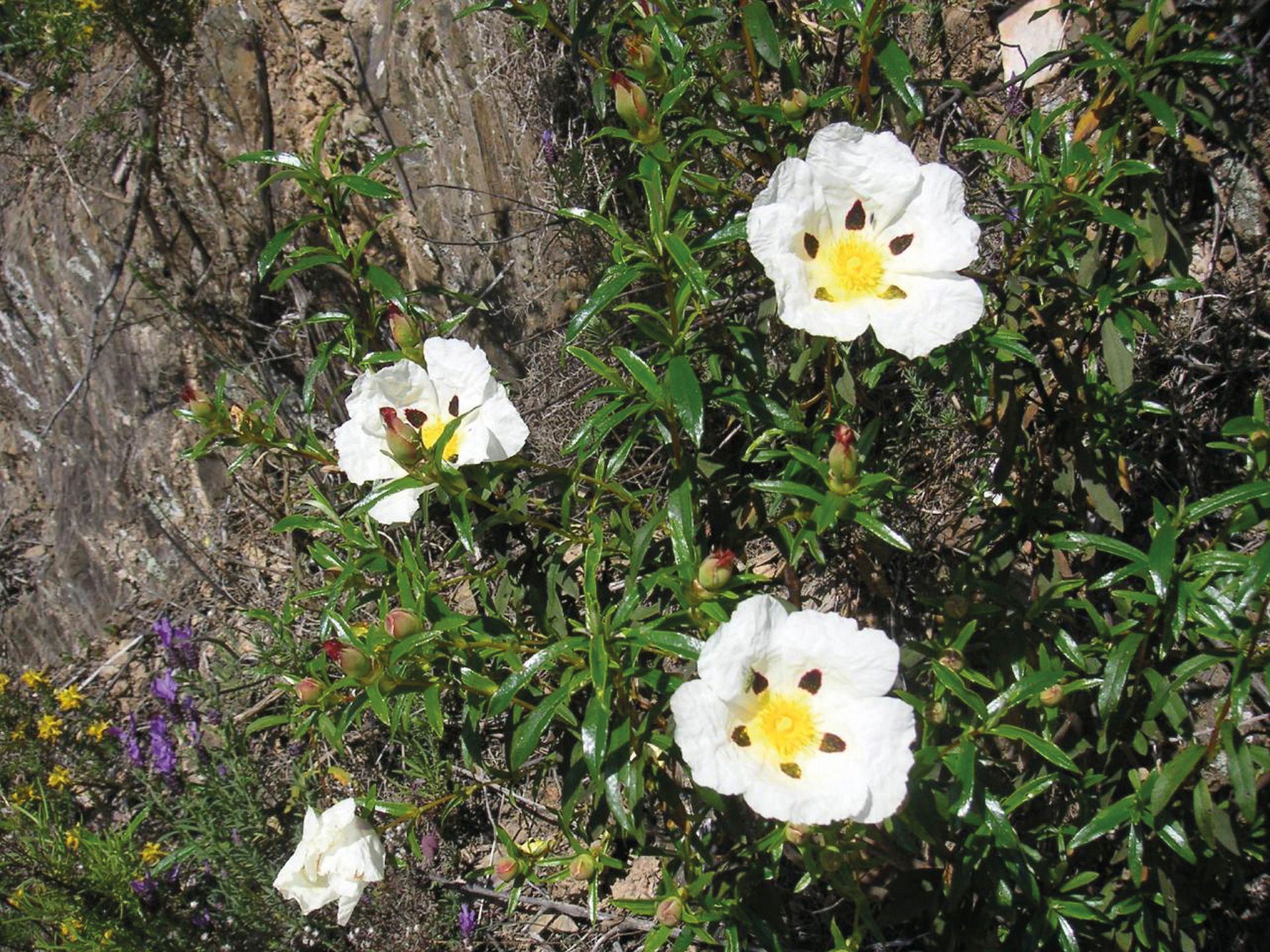 Science has shown that Cistus has the highest content of polyphenols of all known plants in Europe. This means protection from free radical damage and high antioxidant activity.

“The Lefo Institute in Ahrensburg, Germany has come to the following conclusions after trials and studies with Cistus creticus: Cistus is three times more antioxidants than green tea. It protects the heart four times better than red wine and is more antioxidant twenty times than fresh lemon juice”. (http://hellenicaloe.gr/en/cistus-creticus-has-the-highest-polyphenols-content-than-any-plant-in-europe/)

This is a really remarkable record. There are also other valuable ingredients such as cineol, a compound that relieves symptoms of diseases of the upper and lower airways (nose, throat, bronchi), and the plant phenol eugenol, which has a strong anti-bacterial, analgesic, and anti-inflammatory effect. (http://info.kopp-verlag.de/medizin-und-gesundheit/gesundes-leben)

effects confirmed by research are :

“Our daughter had dell warts on her upper arm that spread very quickly all over the body. Our children’s doctor prescribed Thuya globulis and a Thuya tincture, which unfortunately did not help. So we had to go to the dermatologist and had it scraped off, but that hurt our daughter a lot and she still had a lot of Dell warts on the rest of her body. Then we tried the special mixture from Oshadhi which was blended together especially for our daughter. I noticed the success after only a week, that the Dell warts were less and after two weeks they were completely gone. It was like a miracle and I thank you again for mixing this miracle tincture together. I can only recommend it! “

The oils of the blend used were: Cistus, Lemon Myrtle, Thuya, Sage, Frankincense, and Myrrh in carrier oils of Tamanu and Neem. (sent by Mira Nayan, 16/12/2016)

“A year ago I wrote about drinking Cistus tea in order to rid my body of a form of bartonella, one of the co-infections that often show up in people with Lyme Disease.  Every morning for three months I drank most of a cup of this tea.  I say most because some mornings, drinking it made me too nauseous to get all of it down.  Other days I had no problems at all……

After three months of drinking Cistus tea, I returned to have my blood checked, and no Bartonella was found.  In addition, all those nasty symptoms that accom-pany the bacteria — tremors, high anxiety, depression, mania, pain around the ear and neck, other problems that affect my work and driving — had disap-peared a month or more earlier.  Since the Bartonella did not show up in my drop of blood, I assumed it was gone for good and traded the tea for hot water with Lemon” (https://healingsolutionshealth.myshopify.com/collections/healing-teas/products/cistus-incannus-herbal-tea)

“Cistus is more potent than any other agent known for biofilms. Crosses the blood-brain barrier and is 100% absorbed in the gut. It is antiviral. Can rebrew the tea 4 times. Whitens the teeth (also a biofilm which causes yellow teeth), body fluid smells and odors reduce.” – (Dr. Klinghardt)

“I happened to be attacked by a street gang in Madagascar years back on a research journey for Madagascar essential oils. It was late evening – and I had to run for my life in the middle of Antananarivo, the country’s capital. I stumb-led over a block of pavement stones some of which the gang had also taken up and was throwing at me – and I badly hit the ground.  I escaped with the help of a friend who was with me, but had a huge open wound on one of my knees.

Back at the hotel I immediately applied large amounts of Cistus, Frankincense, and Myrrh oil on the open, bleeding wound. Rapidly the bleeding stopped, and I went to bed soon after. Next morning the wound was looking amazingly clean and had already started to heal. The natural anti-septic and wound-healing effect of the oil blend had already produced its miracle.

A few days later the wound was looking nearly healed. I could hardly believe myself how fast this process had been thanks to these beautiful protectors of Mother Nature.” – (Dr. Malte Hozzel) 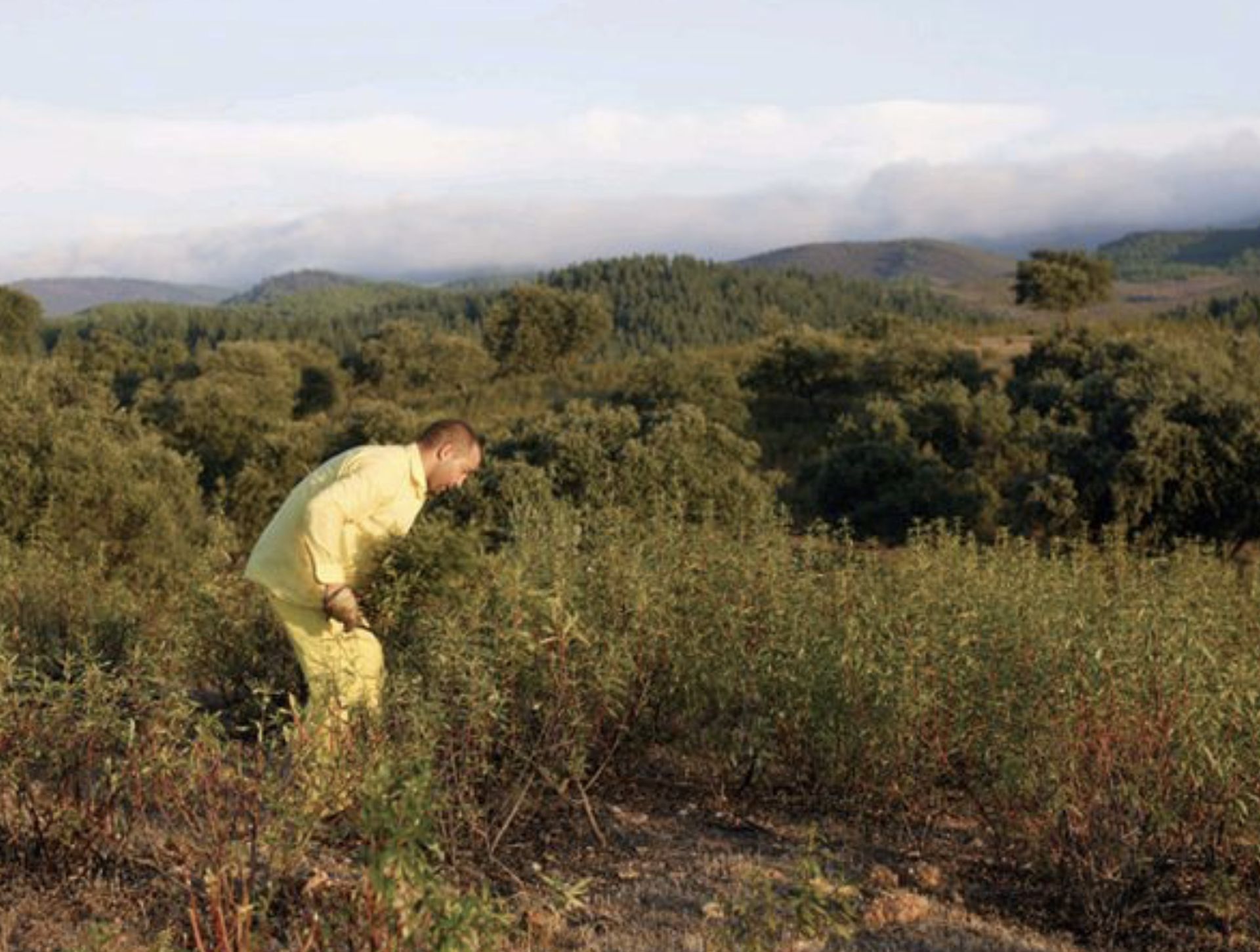 in carrier oil Rosa rubiginosa 10 ml; 2 to 3 drops of the mixture; local skin application in the morning and evening every day

The mixture to be applied locally to the painful area 4 to 5 times per day as needed.